‘Listen To The Young’ 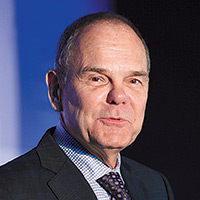 08 November, 2014
Print this article Font size -16+
The phrases that we use so casually today — digital economy, digital divide — were poularised by Canadian business strategy guru Don Tapscott. In the 2007 best-seller Wikinomics: How Mass Collaboration Changes Everything, Tapscott and his co-author Anthony D. Williams outlined five principles for businesses that included concepts such as Openness, Interdependency and Sharing. On a recent trip to India, at the invitation of the Institute of Competitiveness, the author of classics such as The Naked Corporation, Growing Up Digital and Digital Capital elaborated on his ideology and the way forward for Indian businesses. Edited excerpts from an interview:

But there is still a digital divide...
The digital divide was the chapter of my 1997 book, Growing Up Digital. We first called it the Access Gap, then the Net Divide, and then Digital Divide. Back then we said there was a danger that we would have a world of digital haves and have-nots, the doers and do-nots, and people who can communicate with the rest of world and people who cannot.

Since 1997,  1.5 billion have come on to the Internet, and that is not because of cheap laptops, but because of mobility. I met a 14-year-old goatherd in Kenya and she was married, pregnant with her second child, didn’t have water, electricity, but she had a mobile device that could give her access to the Internet. I am sure this causes great dissonance to her. Yet, I think there is nothing more important for India, for businesses, governments (and) civil societies, than to have access to communication. Less than 10 per cent have this access currently. So this is a big challenge.

Isn’t there a mismatch — you don’t have food but have Internet access?
It’s not a zero-sum game. If you have access to the Internet, you are likely to have access to food, education and maybe even organised healthcare. So, it’s not about should we invest in the Internet versus jobs, or versus education or versus clean water. The Internet enables all of these. It’s a very critical national priority. Businesses need to get involved in that. It’s about creating new markets.

How can the Internet be used for competitive advantage by businesses?
I talk about five principles around which companies need to reinvent themselves. One is through Collaboration. It’s about firms opening their boundaries, finding uniquely qualified minds that exist outside. The great example is Goldcorp — it’s the opening story in Wikinomics. This is a gold mining company that couldn’t figure out where the gold was, so it held a contest on the Internet. It gave away half a million in prizes and found $3.5 billion worth of gold.

The second principle, Openness, is about transparency. It’s about companies becoming naked. If you are going to be naked, you need to be buff — meaning you need to have good values and the best products. But transparency is also a powerful force to grow. It drops collaboration costs and improves supply chains.

Third is Sharing — and that’s not about communication or information. Sharing is about leasing or releasing your assets. IBM gave away software assets worth millions, and Linux happened, creating tens of billions of dollars of additional revenues for IBM as it changed the whole dynamics in the computer industry.

The fourth is Interdependency — everything is connected. A business cannot succeed by itself. You need business, government and civil society to work in new ways in multi-stakeholder networks. And the Internet can help bring them all together.

The last principle is Integrity — about being honest, abiding by your commitments. Integrity and transparency are related in a complicated way as transparency is evidence of integrity. Transparency combined with integrity is the basis of trust.

These five principles are now going to be the basis of an award each in India, to be given away by the Institute of Competitiveness.
break-page-break
Which are the technologies that have transformed businesses?
The digital revolution is summed up in the Internet. The big developments for the Internet are mobility, access through mobile. The second is the rise of social computing, social networks, social media — a means of social production. Thousands of people who have never met can together make a powerful operating system in the world. Hundreds of little firms can collaborate online to make the world’s biggest motorcycle industry — the Chinese motorcycle industry. It’s not just a supply chain but it’s peer-to-peer collaboration or social production to create wealth. The third big thing is the new Web, or apps. Everybody is building apps that are taking us back to the Web.

My next book is an app too. I am pushing the envelope on the next book after writing 14 books. It’s called the Don Tapscott App.

What’s in store for books?
I think the non-fiction book is going to disappear. But fiction will not. Printed fiction work is by definition multimedia — you ideate, you imagine. People will continue to read novels forever as they are a great form of imagination. (But) textbooks are toast. When a textbook becomes an app, it can become interactive, it’s no longer a book, but an interactive tool.

Are our brains getting rewired in this digital economy?
Yes, they are. It’s harder for older people. Brains can change — brain plasticity. So, London bus drivers who are on a fixed route have a smaller part of their cerebral cortex  responsible for memory but London taxi drivers, who need to memorise many more routes, have a bigger part of their brain for executing the function.

With young people you are not changing the brain — it’s getting developed that way. A third of the human brain is built between the ages of 14 and 18, and how you spent your childhood is the No. 1 variable in determining how your brain develops. My generation spent hours watching TV. We were passive recipients. The new generation spends time interacting, multitasking, remembering, scrutinising, composing their stories — very different types of brain functions. My 14-year-old can do her homework and do something else together. She is not multitasking, but moving between things as she has a better active memory.

Can you give three tips for Indian businesses?
The first is to recognise that the industrial model is coming to an end. Mass production, mass distribution, mass media, mass education — all these were great but have now run out of gas. Today it is no longer about standardisation and scale. Our recommendation is to use technology — be on Facebook, Twitter, have a mobile device to search the Web. Twitter is the new newspaper.

The second is to have reverse mentors in young people. Listen to the new generation. In their culture is the new culture of work. It’s the first time in history that you can learn from children. Third is to stop tinkering. We need to make fundamental changes to our business models. (Management consultant) Peter Drucker said this to me many years ago — in times of stability, you need great managers. In times of upheaval or change, you need great leadership. Managers need to think about themselves as leaders to bring about fundamental changes.