‘Leverages Are Going To Come Down By A Third’ 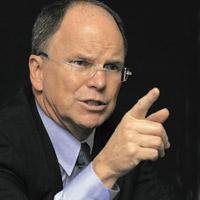 Now that the slowdown is slowing down, there are hectic debates on what went  wrong and whether or not the worst is over. In a changing corporate and banking environment, consulting firm Deloitte Touche Tohmatsu is helping corporations emerge from the gloom safely. Its CEO, James H. Quigley, speaks to BW's Kandula Subramaniam and Anilesh S. Mahajan on some of the impacts of the crisis and how the debt world is going to change. Excerpts:

Prime Minister Manmohan Singh recently spoke of 6 per cent GDP (gross domestic product) growth and the possibility of even 7 per cent later. How do you view this?
India's GDP growth is really impressive. I think to have that belief and to sustain this kind of growth over a period of time is really terrific. Unlike many other countries, including China, India is largely a consumption-driven economy. It is not completely export-driven. Therefore, when the western markets went into recession,  contracting the demand for goods, it did not have the same impact on India.

I believe your company is offering new services to companies to cope with the recession, volatility…
We describe it as ‘winning them in a changing world'. The approach is to help companies come out of turmoil and see the opportunities. That in many ways has been reset. In this upheaval, there have been some very fundamental resets that have occurred. The most significant of which is that leverages are going to come down by almost one-third. Business leaders need to think about how they will compete in a world where the amount of leverage in the system is reduced by a third.

The amount of individual private borrowings have come down significantly. What has happened is that this has just been replaced by public debt in the recovery process. Households, businesses and banks started to deleverage the amount of debt on their balance sheet (or reduce their debt)... that was demand contraction on a global basis. Through the stimulus packages, the public sector then put in place public spending to try and acquiesce that deficit in demand that was created as the deleveraging began.

And this deleveraging has happened across sectors?
When you look at the long-term trend like, say, in the US, you see that there was a very significant run-up in the relation-ship between private debt and GDP — it got to the point where it was not sustainable. I believe that private debt will be reset at a lower level than what it had actually expanded to over a 20-year period.

Will this be across the world or limited to a few countries?
Debt is going to be reset in those econo-mies where it had become excessive, where the asset bubble was most evident. This includes, the US, the UK, Spain and Ireland. There was strong regulatory environment in India, so I don't think there was excess borrowing and, therefore, we will not see a reset (of leverage) of that same level. This is true for China, Japan, Canada and Australia.

What value can you bring to a realty company, say, in the US?
Reset their fundamental cost structure so that they can move their break-even point down, and then optimise their earnings and cash flow. As we advise, assist and share with them what others are doing, that becomes valuable to them. It helps them compete in this new world that is evolving. One of the things that is unique about Deloitte is that we have a significant relationship with 80 per cent of the Fortune 1000.

But why didn't people see the crisis coming?
Quite frankly, we all didn't see the full impact of the systemic risk that was building up. There was continued diversification of balance sheets and the continued ability to securitise and then diversify that risk through structured financial instruments. We believed that sophistication and that innovation was something that was actually going to continue in perpetuity. But in reality we ended up with leverage that could not be sustained. With clear vision of hindsight, it is easy to say ‘why didn't you see this earlier?' If we all had that perfect foresight none of us would have been doing what we are doing.

Do you get a sense that the banking system has cleansed itself?
Some needed corrections are definitely underway. But there are concerns that the stimulus is going to create a second bubble. I believe banks today are loaning money to people who they believe can repay them.

There might be some provisioning on commercial real estate that is yet to be recorded. People are also concerned about consumer debt.

Five years down the line, where do you see the corporate and banking systems headed?
We are going to have more transparency, more accountability and more recogni-tion of the global world in which we live in.

So Gordon Gekko (in the 1987 film Wall Street) preaching ‘greed is good' is no longer true...
(Laughs) I think greed is never right. I don't think it is right today or even five years down the road. Accountability and responsibility is better than greed. Transpa-rency is the way in which we will solve many of the issues of public trust and confidence —  increased transparency in executive compensation, risk on balance sheets, etc.