'Kejriwal Is Playing A Very Useful Role As A Durbar-Buster' 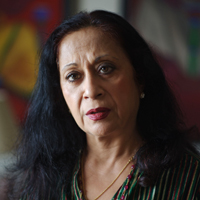 08 November, 2014
Print this article Font size -16+
Tell us how and why did you come to this very title, Durbar.
It seemed to me the obvious title since the book was written with the idea of portraying the disconnect between the Durbar in Delhi and India. Also, having covered politics and governance in Delhi for more than thirty years I have observed that one of the reasons for India’s enormous problems of poverty, disease and illiteracy is because we have been ruled since 1947 by a democratically elected Durbar. The number of political princelings and princesses that we have bred from Kashmir to Kanyakumari confirms the democratic feudalism that is our real political system.

How difficult was it to put the book together?
Writing is always difficult and writing a book like this more difficult than most because it covers a period of nearly two decades.

You have lived in Delhi so long. Tell us about your relationship with this city, its people; dead or alive.
Delhi for me will always be home. But, the Delhi of my childhood no longer exists. My grandfather, Rai Bahadur Basakha Singh, was one of the contractors who worked with Edwin Lutyens to build New Delhi and the city of my childhood was a place of wide, tree lined avenues and big colonial houses set in large gardens. This Delhi has disappeared and although I think Delhi is one of India’s few cities that have not been totally destroyed, the absence of proper urban planning makes me very sad.

You have observed India’s political scene since 1975. Has it become filthier or is that it’s been so ever since but today things get exposed faster?
In 1975 when Mrs. Gandhi put India under a state of Emergency and suspended fundamental rights what worried us most was the amorality of what she did. What worried us was her blatant misuse of political power to diminish the institutions that keep democracy alive like the press and the judiciary. Today, this problem continues because of Durbar politics in Delhi in which the prime minister has been appointed by the leader of a political party. This is a very dangerous diminishment because we have a situation in which Sonia Gandhi has power without accountability and has made policy decisions through her National Advisory Council that consists of unelected do-gooders. And, then on top of this, we have the huge corruption scandals. So, you tell me whether things have become ‘filthier’ now than they were then.

You are ruthlessly honest in the book when it comes to sketching your characters; Rajiv to Sonia to all the beautiful and rich people in Delhi. This style, was it a deliberate choice or did it come naturally? How did you prepare for this?
Is there any point in writing a book that is not ‘ruthlessly honest’? I believe that India has been let down by my generation of Indians, by an entire ruling class. Would there have been any point in writing Durbar and not saying this with ruthless honesty?

On hindsight, how do you look at the 1975 emergency today? Are we living through a silent emergency now, or 1975 was worse?
Yes. The Emergency seems almost like a time of innocence when compared with the huge powers of repression that politicians and high officials have today. Repression is always easier to combat when it is obvious and more dangerous when it is veiled in the colours of democracy. But, there is a huge middle class today and that is a very healthy development.

You have observed how the JP movement surged and settled. Do you think Arvind Keriwal’s movement can be compared to JP’s, and why?
Arvind Kejriwal is playing a very useful role as a durbar-buster. He has dared to attack some of our holiest of holy cows and this is good. But, his economic agenda if ever implemented will take us back to a time that was truly bleak. JP’s movement was very different since it concentrated entirely on political amorality and corruption.

When and where do you write?
Whenever and wherever I can. I write four columns a week, two in English and two in Hindi and till not long ago was doing a weekly television programme so I have learned to manage my time well.

What’s your energy drink?
A glass of red wine in the evening.

What's the hardest thing about being a writer?
Writing.

What makes a book a really good read or a bestseller?
Readability.