'Kanimozhi Had No Role In Rs 200 Cr Transaction' 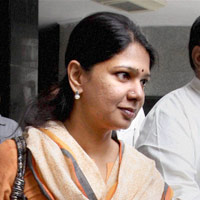 08 November, 2014
Print this article Font size -16+
A prosecution witness today told a Delhi court that DMK MP Kanimozhi, who is facing trial in the 2G spectrum allocation scam case, had "no role at all" in the Rs 200 crore transactions between Kalaignar TV (P) Ltd and Cineyug Films (P) Limited.

The statement assumes significance as it contradicts the CBI theory according to which Kanimozhi was taking interest in the day-to-day affairs of the TV channel in which she was having 20 per cent shares.

Deposing as a prosecution witness, G Rajendran, General Manager (Finance) of Kalaignar TV (P) Ltd, said the DMK MP had no role in the investment matters between Kalaignar TV and Cineyug Films (P) Ltd, whose Director Karim Morani is also facing trial in the case.

"It is correct that in all the investment matters from Cineyug Films (P) Limited to Kalaignar TV (P) Limited and vice versa, Kanimozhi Karunanithi had no role at all," he told Special CBI Judge O P Saini during his cross examination by senior counsel Ram Jethmalani, who appeared for the DMK MP.

Rajendran, whose recording of statement concluded today, told the court that Kalaignar TV had applied for the requisite licence from the Ministry of Information and Broadcasting more than a month after Kanimozhi's resignation from directorship of the channel on June 20, 2007.

"It is correct that application for licence to Ministry of I&B, was made for the first time on July 30, 2007, more than a month after resignation of Kanimozhi Karunanithi.

"It is correct that it would be wrong to say that Kanimozhi was looking after the obtaining of licence from Ministry of Information and Broadcasting," he said.

According to the CBI, Karunanidhi's wife Dayalu Ammal, his daughter Kanimozhi and co-accused Sharad Kumar, Director of Kalaignar TV, have 60, 20 and 20 per cent shares of the TV channel respectively.

Rajendran told the court that Kalaignar TV received Rs 200 crore from Cineyug Films (P) Ltd and the money was received through banking channel in different tranches. He also said that on receipt of Rs 200 crore, all the money were put into the business of Kalaignar TV.

"Cineyug Films (P) Ltd asked for the return of the money, as it had approached Kalaignar TV (P) Ltd for equity participation and that did not happen," he said adding that the money started to come from Cineyug Films in December 2008 and continued till August 2009.

During his cross examination, Rajendran said Kanimozhi had neither attended any board meeting of Kalaignar TV nor visited its office after June 20, 2007.

On being cross examined by senior advocate Sushil Kumar, who appeared for Sharad Kumar, Rajendran said Dayalu Ammal was fully aware of the decision to raise Rs 200 crore from Cineyug Films (P) Ltd and Sharad had "not acted independently on his own" as all his actions were authorised and approved by Dayalu Ammal.

He also told the court that Rs 200 crore transaction between the two companies was "genuine" and no "sham document" was executed in this regard.

Kanimozhi, along with others, including former Telecom Minister A Raja, is facing trial in the case for various offences punishable under the IPC and under the Prevention of Corruption Act.