‘It Is A Moral Victory For Us’ 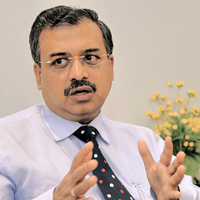 A continuing tussle with the promoters of Israeli generic drug maker Taro Pharmaceuticals for control keeps Mumbai-based Sun Pharma in the news. At a shareholders’ meeting on 31 December in Haifa, 78 per cent of minority votes cast (apart from Sun’s) were against the re-election of the existing directors including Taro’s chairman and promoter Barrie Levitt. However, the Levitts still control the company through a special class of shares. Sun’s chairman and managing director Dilip Shanghvi spoke to BW’s Gauri Kamath days before the meeting on the Taro stand-off and other issues. Excerpts:

On Taro
Taro’s audited accounts have not been published for a long time. Taro has received a notice from the Securities and Exchange Commission that if the audited results are not submitted on time, it might consider suspension of trading. We invested in the company because we thought we could run the business much better than the current management. The entire plank on which they are fighting (us) is that they are doing so to protect the minority shareholder. But if you have a large number of minority shareholders (voting against you), then that is a very clear message. For us, it is a moral victory.
On the biosimilars opportunity
If you look at the number of new product approvals, then biologicals are increasingly becoming a bigger component of business. So you cannot take a position that ‘we will only be a small molecule (chemical drugs) company’. You have to find a way to become a large molecule company profitably. We know that we are late for the first wave of products. For instance, Dr. Reddy’s has far better capacities and demonstrated performance in those biogenerics. We can’t work with those products. We can acquire, but there has to be economic viability. We will find a way to get in with some kind of differentiation.
On the US generics market
I see increasing competition; newer companies from China, and eastern Europe getting in; and lower prices. Till now our approach to try and protect margins by having one or two products that give us some differentiation seems to be working. But as the business becomes bigger, we will have a bigger challenge. The market is not going to get better. You have to find ways to make money.
On the possibility of a merger between two large Indian drug firms as an alternative to selling out to a foreign drug maker.
Indian companies are run by promoters. They are accountable to shareholders, but have never reported to anybody. But in any relationship post-integration, there will have to be some hierarchy. The other issue is that every promoter thinks that he can do better than the others! If two successful people find a way to work with each other, then, from a concept point of view, it is a very attractive proposal. The bandwidth in Indian pharma firms is limited because most are promoter-owned. For internationalising the business and for making it big, what is equally important along with resources, technology and capability is the bandwidth. However, I do not think that for at least seven, eight or 10 companies, there is a need to sell at all even if they don’t merge with each other. The business is currently growing well.
(This story was published in Businessworld Issue Dated 18-01-2010)
Tags assigned to this article:
magazine gauri kamath interview sun pharma dilip shanghvi taro