Mumbai (Maharashtra) [India], Aug 31 (ANI): The passing away of Congress veteran and India's former president Pranab Mukherjee has left the country in a state of shock and sorrow. Several Bollywood celebrities took to social media to express grief and extend condolences to the bereaved family.
Actor Ajay Devgn expressed grief over the demise of the 84-year-old leader and tweeted, "India loses a great statesman & respected leader. My condolences to the family. #PranabMukherjee."

"Deeply saddened to hear Pranab da Mukherjee passed away. Our former President, a Bharat Ratna and a thorough gentleman. We shared a very warm and cordial relationship. Heartfelt condolences to the family," wrote veteran singer Lata Mangeshkar on Twitter as she condoled the demise of the former Indian President.

Former President Pranab Mukherjee passed away on Monday at the Army Hospital (Research and Referral) Hospital where he was admitted earlier this month and had undergone surgery for the removal of a clot in his brain.
His son and former MP Abhijit Mukherjee gave the information in a tweet.
"With a Heavy Heart, this is to inform you that my father Shri Pranab Mukherjee has just passed away inspite of the best efforts of Doctors of RR Hospital and prayers, duas and prarthanas from people throughout India! I thank all of You," he said.
He was admitted to the Army Hospital in Delhi on August 10 and after testing positive for COVID-19.
Varun Dhawan shared a lively picture of the former Indian President on Instagram and expressed grief over the demise. He wrote, "RIP sir .2020 has been an extremely hard year for one and all. We have lost a great leader today. Condolences to family."

Shraddha Kapoor shared a picture of the former President and expressed sorrow by leaving folded hands and a broken heart emoji. 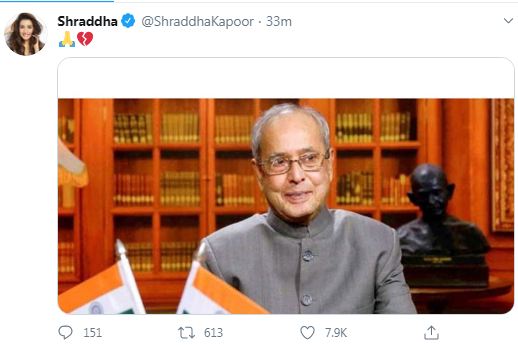 Remembering the moment when he received Padma Shri Award from the former President, filmmaker Madhur Bhandarkar took to Twitter as he extended condolences to the family of Mukherjee. He noted, "Deeply saddened to hear about the demise of Bharat Ratna Shri. @CitiznMukherjee. I had the privilege of receiving my PadmaShri bestowed from #Pranabda.My deepest condolences to his Family Members & Admirers. #OmShanti ." 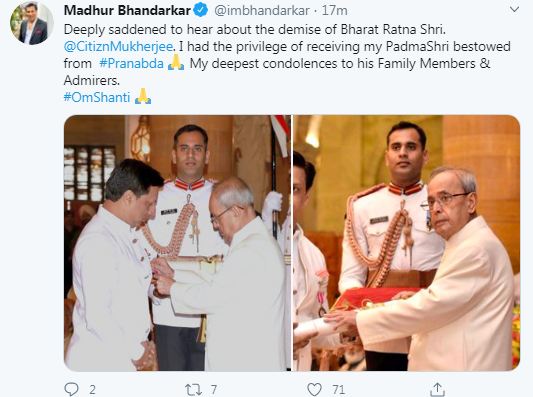 "Deeply saddened to hear Pranab da Mukherjee passed away. Our former President, a Bharat Ratna and a thorough gentleman. We shared a very warm and cordial relationship. Heartfelt condolences to the family," tweeted Legendary singer Lata Mangeshkar as she expressed grief over the leader's demise. 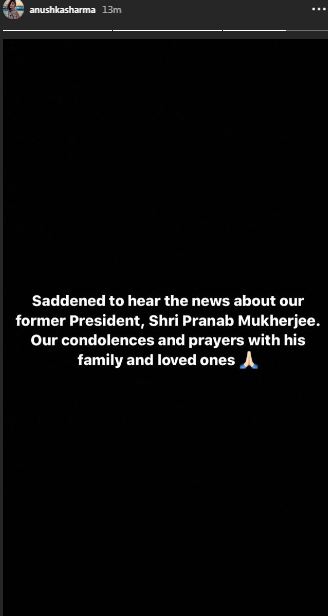 "Saddened to hear of the news about our former President, Shri Pranab Mukherjee. Our condolences and prayers with his family and loved ones," wrote Anushka Sharma on her Instagram story as she expressed sorrow over the passing away of the former president. (ANI)