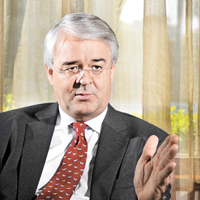 08 November, 2014
Print this article Font size -16+
KPMG International brought its 900 new partners from across the world for a get-together in New Delhi last month, signalling the immense potential that India holds as an emerging destination for the global investment community. In an interview, Michael J. Andrew, global chairman of KPMG International, tells BW’s Joe C. Mathew why an active presence in India is extremely important for the global audit, advisory and tax consultancy behemoth in these times of economic gloom. Inciden-tally, Hong Kong-based Andrew is the first chairman of a Big Four (Ernst & Young, PricewaterhouseCoopers, Deloitte and KPMG) firm to be based in the Asia-Pacific region. Edited excerpts from the interview:

What is your opinion of the current global economic situation?
I think a turnaround (from the slowdown) is about to emerge, though the next six months are going to be difficult. First, there seems to be growing optimism in the euro zone. Second, the US, which is preoccupied in politics, will see some clarity and positive signs after Christmas. Leadership transition in China is taking place. The next (Chinese) five-year plan will also kick in by March. In the Middle East, there could be some diplomatic solution. And, if reform measures by countries like India and Brazil succeed, their markets will get back to stimulus and growth. If you see the five trends together, there are signs of the world economy improving towards March.

Have India’s recent policy changes such as foreign direct investment (FDI) in retail helped global investors gain confidence?
The past eight weeks or so have been well received by the (global investor) community. Everyone is now waiting to see whether the country can deliver (on its promised reform measures). This signals a change and indicates that India wants FDI for its businesses. It’s just about the sentiment. But then, consider the announcement on the insurance sector (where), I think, there have been five previous announcements. We need to see where it leads.
What does India need to do to sustain the interest of global investors?
India needs to get back to an annual growth rate of 8 per cent-plus. And it cannot do that without FDI. That’s the theory. In practice, people want to invest in India...but they need the right policy setting. India is over-regulated in some sectors, and just the opposite in others. Thus, key reform measures are what foreign investors are looking for.

If India fails to pass the anti-corruption Bill, it will be the biggest negative factor for  international investors.

But corruption is not an India-specific issue?
No, what I have told international investors is that (corruption) is a critical factor to be considered before doing business in emerging markets. The capital will flow to those (emerging) markets where there is transparent reporting. So you need to understand that you are competing with Russia, China, Africa, South America, etc., for (overseas) funds.

What is KPMG’s outlook for India?
We are growing at 25 per cent a year. India is the third fastest-growing economy in the world, so there is a huge appetite for the services we provide here. We are moving a lot of delivery and offshoring services to India. We have a strong tax practice here. International investors do a lot of due diligence before deals and transactions, and they want to make sure that international practices are adhered to by these (Indian firms). That’s good for us. IT, technology efficiency, financial services and energy consulting are sectors that are growing.

Regarding due diligence, the government is reportedly looking into KPMG giving Reebok India a clean chit in 2010...
We did not give a clean chit to Reebok (accounts). If you look at Reebok’s statement, that makes it absolutely clear that KPMG’s forensic team’s engagement was for a different purpose, and it did its job. There is a lot of misreporting about what really happened here... We did raise red flags; we did raise queries about the problems that were there.

What is the chance of fraud detection in statutory audits?
I think this is a big issue in emerging markets. As an auditor we should be looking at material that can have an impact on financial accounts. The micro ones are very hard to detect. That’s why we started our forensic service. Increasingly in markets like India, China, Russia and Africa, where international clients want to come in, (firms) are looking for possibilities of such frauds. Here we use a lot of sophisticated technologies which actually look at all transactions, which you can miss during a standard audit.

Each KPMG partner firm in India is an independent legal entity. How do you ensure that ethics are followed?
This is a global brand. We audit our audits... we have independent teams coming in to review the quality of audits carried out by our own partners. Such teams report to a global board. (If needed) we ask such partners to take corrective actions, sometimes we terminate their licence.

The quality here (of Indian partners) is generally very good. But we still have challenges. So there is an education process to make sure that they meet global standards. We expect the same quality of work (everywhere).