‘Inclusive Growth Is Larger Than MGNREGA’ 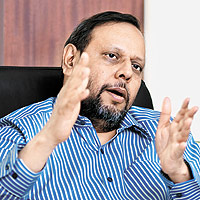 Another argument is that the next level of inclusive growth is when you move people from low productivity activities to higher productivity activities. But we're still at the level of giving out doles. Are we using our inclusive growth agenda sub-optimally?
Some people say that growth comes first and equity later. That's a wrong approach. I feel it has to happen simultaneously. Otherwise, it leads to damage. Like it happened in the mid-90s when people concentrated on growth but not on inclusive approach. The damage has been done. We've also jumped from agriculture to services without focus on manufacturing. That is also hurting us. Services lead to unequal growth. Either you have very hi-tech areas which account for about 2 per cent of the workers, or very low productivity jobs like shops. In India, unemployment per se is not the problem, the working pool is the problem. Many people are working but in low productive jobs without any social security. Almost 92 per cent of workers are in the unorganised sector. You need to improve their position, from low productivity to higher productivity.

And then, in the manufacturing sector the share of employment is only 12 per cent. In China, it's 30. It is 40 per cent in other countries. So you can shift from low productivity agriculture to manufacturing and the incomes of the people will increase. Rural non-farm sector, agro processing can take that. We process only 2 per cent of our fruits and vegetables compared to the Philippines' 70 per cent.

Are we in a serious phase of jobless growth?
If you take NSS data, between 1993-94 and 1999-2000 there wasn't much employment growth. There was growth in 2004-05, but stagnation in 2009-10. The Planning Commission says the reason it was stagnant because earlier the population up to 18-20 years were termed ‘workers' because they were working. Now, most of them are studying. As a result, their participation rate in the labour market has declined. But in general, if you look at the organised sector, they are not producing enough jobs. They are more in the unorganised sector.

What should the government push to accelerate job growth?
Manufacturing is better than services because it has a downstream effect. The linkages are also much more. Unfortunately, we are going the other way. Services are creating very low-end jobs. Whereas manufacturing can
create better jobs and it can absorb the agriculture workers.