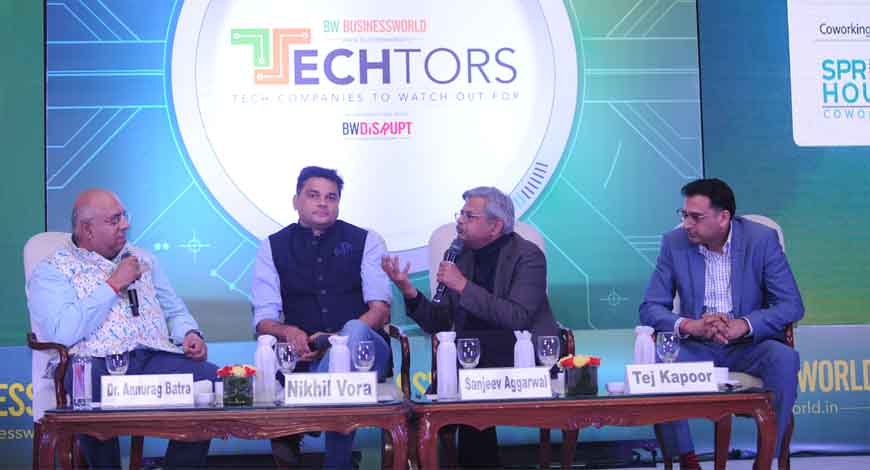 With technology advancing at unprecedented pace, technological disruption has become rampant. Not every technology alters social or business, but some do possess the potential to disrupt status quo, along the way impacting how people work and their lifestyle.

Reiterating this, Dr. Annurag Batra, Chairman & Editor-in-Chief, BW Businessworld & exchange4media Group poses a question to top investors on whether technological disruption is an opportunity or a problem. Nikhil Vora, Founder & CEO, Sixth Sense Ventures believes that leaders are rarely innovative. He says, “They are not as keen to think new ideas as they are concerned about status quo. It is important for industry leaders to believe in startups as that will send a message deep down, and will help in changing the cause altogether.”

For established industry leaders, an important yet difficult task is to identify tech players that are able to succeed. Offering formula of sorts to figure out technology winners,

Sanjeev Aggarwal, Founder, Helion Venture divulges that digitalisation of economy and environment sustainability are some mega trends to watch out for. “These help in boosting a technology driven idea. More the sustainability-oriented approach, more will be capital,” he states.

In the tech-deep space, it is the investors that play a profound role in encouraging entrepreneurs to implement their ‘big idea’ in the market. In this context, Tej Kapoor, Managing Director & Head, Fozun RZ Capital India agreed that it is an advantage to be a late mover investor. He believes that investors want the market to be as deep as it can be. To support his stance, he cited the example of Flipkart, which did the hardwork of educating people, and how Amazon followed the former.

These technology experts also shared their idea on technology investment for 2020. Vora affirmed that ‘consumer contract manufacturing’ would be his go-to investment this year, while Aggarwal and Kapoor stood in favour of how the internet is applied in distributing the next 300 million users.

On the innovation v/s. disruption. Vora firmly asserted that “India is not great for innovation” but is adept at the virtue of disruption.