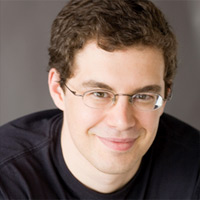 Why did you begin to write, especially fiction? Why choose fantasy?
I love telling stories. Always have, even from my youngest days. I'm not sure why; it just seems to be a part of who I am. As for why fantasy . . . I would say I love fantasy because the genre often has some of the most beautiful prose, because fantasy (like science fiction) lets you see and experience things that could never exist in the real world, and because I enjoy visiting new worlds and seeing new things. Fantasy is the oldest form of fiction in the world. If you go back to the myths and legends of antiquity, you'll find them filled with giants and monsters and all sorts of fantastical creatures. The Odyssey is fantasy. Beowulf is fantasy. Many of the works of Shakespeare are fantasy. It's an incredibly rich tradition for an author to work in, and it allows one to speak about universal themes of human existence.

What are your reading preferences or are you omnivorous? Any particular book and style of writing that has left a lasting impression upon you?
I am definitely an omnivorous reader. At the moment I'm working my way through the collected science fiction novels of Ian M. Banks and enjoying them greatly. When I was younger, I very much liked Tolkien, Anne McCaffrey, Frank Herbert, Raymond E. Feist, Mervyn Peake, E. R. Eddison, and many, many more.

Of all the writers, whom would you consider the greatest influence upon you, and in what manner?
Frank Herbert, Mervyn Peake, Tolkien, E. R. Eddison, Stephen King, Ursula K. Le Guin, and Evangeline Walton. All of them influenced my approach to storytelling or my actual prose style. If I were stranded on an island in the middle of the ocean, I would be very happy with only books from those authors.

Do you think the release of the Lord Of The Rings films created an appetite for the inheritance cycle? Note, I am not referring to the Rowling phenomenon as your books seem to be heavily influenced by C.S. Lewis.
I think that the rise of CGI is to thank for the modern popularity of fantasy. Obviously Tolkien and Rowling and Lewis would still be read widely even if they had never been adapted for film. But the fact that modern technology finally made it possible to film the sorts of things that writers have been describing for thousands of years has, in my opinion, introduced these sorts of stories to millions of people who might otherwise never bothered to pick up a fantasy book in the first place.

Your emphasis on a strong story is crucial, and that is what sells the most. But what do you think actually contributed to the phenomenal sales of your books?
I think it's the focus on Eragon and the other young characters growing up and coming of age. That is what appealed to me the most when I was a young reader. Coming-of-age stories are stories of the powerless gaining power and wisdom, and that's always a popular theme. Also, I think that the relationship between Eragon and the dragon Saphira is really the heart of the series.

Are you planning to include India in your book tour later this year? We have some fantastic lit fests that will begin soon after your book is released.
I would love to visit India. I've been getting fan letters from readers there for years. My publisher is the one that arranges my tour, but I'll be sure to mention it to them.

Do you think a prerequisite for fantasy is to create a new language, or did you feel that the story compelled you to create one?
I don't think it's strictly necessary. In my case I felt it was needed in order to create a believable world, but many authors have managed to write about imaginary worlds without going to such lengths.

Do you think an author promoting his book has an impact on the sales?
I do. It can have an enormous influence on the reception of the book by the public. That is why I always do as much touring and publicity as possible whenever I release a new book. After spending so long working on a story, I want to make sure that as many people as possible can have a chance to read it! Speaking of which, I certainly hope that my readers in India will enjoy Inheritance, the fourth and final book of the Inheritance cycle. I had a lot of fun writing it, and I think it's the best book in the series.

Jaya Bhattacharji Rose is a publishing consultant and critic