‘I Don’t Think CAG Report Will Scare Off Investments’ 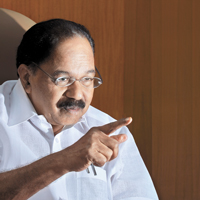 08 November, 2014
Print this article Font size -16+
Of late, the Indian power sector has seen more lows than highs. Fuel shortage, increasing prices of imported fuel, policy roadblocks, infrastructure bottlenecks and the poor financial health of distribution utilities have almost brought the sector to a grinding halt. The CAG red-flagging coal block allocations may just be the last straw. Since taking charge in August, minister of power and corporate affairs Veerappa Moily has been grappling with these issues. In an interaction with BW's Chhavi Tyagi, he sounds upbeat about overcoming all obstacles to the sector's growth.

What would the impact of coal block cancellations be on the power sector?
The coal blocks mentioned in the CAG report do not come under the current Plan targets. Our targets for the 12th Plan will not be impacted. We might see its effect in the 13th Plan. For the current Plan, we are very confident of achieving anywhere between 84,000-88,000 MW. We were able to do 54,000 MW of capacity addition in the 11th Plan and in just the terminal year we did 20,000 MW. With that kind of speed already achieved, there are no questions of underachieving on targets. We already have 82,000 MW under various stages of implementation. Of this, fuel linkages for 60,000 MW are already in place and for the rest, we are in talks with the coal ministry.

Will the ministry speak for producers whose blocks may get cancelled?
The inter-ministerial group is looking into this and we are confident that they will apply the due process of law. Nobody is going to interfere with this process. Moreover, the de-allocated blocks will again be allocated to someone else. The Mines and Minerals Act is being amended and any future allotment would be on competitive bidding.

Wouldn't CAG allegations scare away investments?
I don’t think so. We should not attribute too much importance to the CAG. They are auditors and there is no reason to be afraid of them. A wrong message is going out in the media. You can cancel allotments if the allottees do not abide by certain regulations and rules. However, they are already governed by very strong regulations. I met the power producers a month ago and I told them to shed all apprehensions. Their enthusiasm should not dry up. They are marching forward and we are here to solve all their problems. It is a myth that the CAG report will hamper investments. Anyone engaged in malpractices or manipulation of facts will be punished. It is they who should be scared of the report; genuine allottees should not fear.
Your ministry is planning amendments to the Electricity Act 2003...
The task force set up by the Central Electricity Authority (CEA) has already submitted a draft of the proposed amendments. We have also asked the Central Electricity Regulatory Authority (CERC) and State Electricity Regulatory Authorities (SERC) to come out with their proposals. The proposed amendments pertain to the proper functioning of distribution utilities, issues regarding allocation of coal, fuel pricing and granting more independence to SERCs. It will take us a couple of months to firm up the amendments. As soon as they are finalised, we will send them to the Cabinet for approval.

The two supporting sectors - railways and coal - have proved to be a hindrance for the power sector. How will you ensure their parallel development?
Rail linkages have been a challenge. The Prime Minister's Office (PMO) has already constituted a committee to ensure that the power sector gets adequate railway connectivity. As for coal linkages, no FSA (fuel supply agreement) was signed after 1 April 2009 till the PMO intervened recently. Both the PMO and the Planning Commission are very particular about this. In its last meeting, the Planning Commission has suggested formation of the National Investment Approval Board to be constituted under the chairmanship of the PM. Any project of Rs 1,000 crore cleared by the committee will not be open to question.

Coal India has indicated that incremental production for the power sector will only be 100 million tonne during 2012-17, which will not even meet the needs of existing projects. How will you resolve this?
Coal India has to find a way to meet the demands of the power sector. Why are they sitting on such large reserves? If the coal sector is not able to meet the country's demands, then we will have to revisit the idea behind nationalisation. This is why coal blocks were allocated. We are hopeful that the allottees will introduce new technology and increase coal supply.

Power sector stakeholders are hoping for clarity on the policy front. Do you think that the ministry will be able to deliver?
The private sector contributed 55 per cent to the 11th Plan targets. This is expected to go up to 60-65 per cent in the current plan. I am aware of the issues it faces. Recently, a certain high court stayed 11 projects at an advanced stage of commissioning. This amounts to Rs 8,600 crore in investment already made. Most of these projects had the necessary clearances and staying them might lead to serious repercussions. I am taking stock of all such projects which might have been similarly stayed. We have to find a way to resolve this impasse.