‘I Am Not Keen On Doing The Deal That Pfizer Did’ 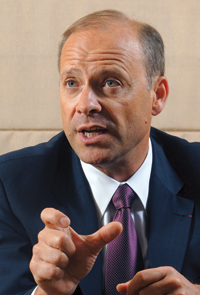 Chris Viehbacher, CEO of Europe's leading drugs and vaccines group Sanofi-Aventis, comes to India barely eight months into his new role. Viehbacher, who until recently helmed GlaxoSmithKline's North American operations, is leading Sanofi-Aventis's push into emerging markets. Since he took over, the group has bought branded generics maker Medley in Brazil and made waves in India with the €440-million (about Rs 3,000-crore) acquisition of Hyderabad-based vaccines maker Shantha Biotech. Viehbacher talks to BW's Gauri Kamath about his plans for Shantha, the ‘patent cliff' and how he is trying to revive research and development (R&D) at Sanofi. Excerpts:

What do you need to do differently to tap into the emerging markets opportunity?
You have to adapt your product portfolio. That is why, for instance, we acquired (branded generics makers) Zentiva and Medley. That gave us business in branded generics. But it wasn't so much to be diversified in generics but to enlarge our portfolio of affordable medicines. The second thing is cost. Shantha provides us with a high-quality manufacturing facility to make vaccines at a much more affordable price. If India should choose to use the inactivated polio vaccine, we could get Shantha to produce that. We could use that facility to produce Lantus — our recombinant insulin product.

Is it primarily vaccines and generics that will drive your emerging markets push over a two-year horizon?
One of the things that I am looking to do is provide more decentralised decision-making around product mix so that we can adapt it country by country. Because people say ‘emerging markets' in a generic way as though they are all the same, and they are not. The strategy that we have for India is not going to be the same as for Russia, because the competitive situation, the healthcare needs and the medical systems are all different. I don't even like using the word ‘emerging markets'. They are rapidly growing, new markets and that is what is attractive.

Your valuation of Shantha was on the higher side given that a couple of years ago Merieux Alliance acquired it for a lot less.
I am not buying Shantha for the sales; I am buying it as a platform of capabili-ties. This is probably the best manufacturing facility in the entire southern hemisphere for vaccines. I think the price is actually more than reasonable.

Is the move into generics as radical a change as we in the media believe it to be?
There are some things that I would call hardcore generics. I would not want to try to compete with Teva in the US. If you want to compete in generics in the US, you have to drive down to the lowest cost and that would be a radical move for us. However, when you move outside the US and Europe, the distinction between branded and branded generics is not quite the same. For example, we bought Medley in Brazil. We were already a big business there. Patent protection is not necessarily all that robust in Brazil anyway, and we also had a big portfolio of older products. So our general manager there said, "this (Medley) is not that different. Ninety-five per cent of what I am selling as Sanofi-Aventis is not patent-protected". But there are some changes. Once you are in the generics business you are making everything. That is why I have not been as keen on doing the deal that Pfizer did (Pfizer tied up with two Indian companies to source generics). Because Pfizer got the dossiers. But why I bought Zentiva is because there is a tremendous competence. I don't want to spoil all that by having my pharma guys run those plants. I integrate the commercial piece, but in regulatory, life cycle management, and manufacturing, we are buil-ding a centre of excellence. That is not such a radical move.

You said to analysts that you would be maintaining your topline at 2008 levels in 2013 because of patent expirations?
Yes, people became very focused on the 20 per cent of business that we were going to lose to patent expiry. And were not focused on the 80 per cent that stays. We have five growth levers that are already on track to compensate for those patent expiries. Our vaccines, emerging markets, Lantus and OTC business are all growing in double digits. And finally, we do have some new products such as Multaq (anti-arrythmic), which has just been launched. We can deal with the patent cliff before I go buy anything. Now, I am not going to spend four years as CEO working 24X7 to get to the same level in 2013 as we are in 2008, and this is where external growth, partnerships in R&D, and the like, can bring growth on top of that. Those five growth levers not only fill the gap, but are more sustainably growable because I am not dependent on patents. So I have changed the composition of the business by 2013 to be less dependent on the classical blockbuster paten-ted model, which is a boom-and-bust business.

When will people stop talking about Big Pharma's R&D productivity crisis? Wh-ere is the turning point and are we there yet?
No, I don't think we are there yet. I don't think we are going to stop talking about it till we are through with the patent cliff. I think it's going to be a couple of years. You know, when I became CEO, the three areas where I spent most of my time were in R&D productivity, external sourcing of growth and transforming the company to fit these five growth levers. So, we have done an awful lot on acquisitions, partnerships, and on identifying growth platforms. R&D will be the hardest of the three to achieve. And that is largely because nobody in the industry has really found the model. I have 11 management levels in our R&D. I have got to go way, way, down in my organisation to actually find someone who is working in a lab somewhere. The rest of them are all managers.

When you look outside for R&D tie-ups, which are the places you can go to?
We are trying to build a true competitive intelligence tool. The National Institutes of Health in the US has such a tool to be able to say where is the best science coming on a subject anywhere in the world. You have to be in places where you got very strong academic institutions and biotech companies. So you hang out in Boston, and the Bay area and Hyderabad. I bought a company called BiPar in the Bay Area. There are only 18 people in BiPar, but they are all ex-Amgen and ex-Genentech. The company is a spin-off out of Stanford University, so I am now plugged into the Bay Area network. Varaprasad Reddy (Shantha's founder) is very plugged into Hyderabad. So if there is stuff going on, I now have real estate in that area.

Click To Read The Longer Version Of The Interview