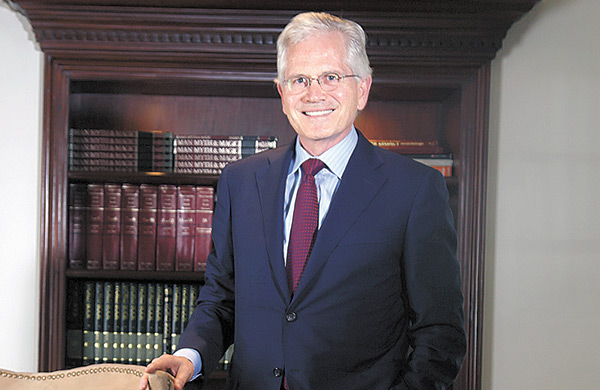 08 November, 2014
Print this article Font size -16+
From addressing imbalances in compensation through regulation to concerns of recruiters, Damien O’Brien, global chairman of executive search and talent management firm Egon Zehnder, and Rajeev Vasudeva, its newly appointed chief executive officer (CEO), talk about what they look for in a future leader, in a chat with  BW | Businessworld. Edited excerpts:

What are the trends shaping the future of hiring? Is technology playing a part?
Rajeev Vasudeva (RV): Earlier, hiring was an event-driven phenomenon. Now, in a complex and volatile world, we are finding that leadership hiring decisions are becoming longer-term, process-driven and have to do with potential future leaders. It involves thinking two to three years ahead. It’s about how you groom people to get there. It might have both an internal component and an external component.

The other major trend: we look to hire based on competence. Earlier, we used to say past performance is the best indicator of future success. Today, when the future is unpredictable, a lot of the work that we do is about predicting potential. It’s not just about what you did and what your track record was earlier, but it is more about “do you have the potential to grow into a bigger role”. Do you have what it takes to deliver in an uncertain environment? That’s becoming more critical. Leadership decisions are more about identifying high potential and betting and developing that.

What are the skill sets that leaders of tomorrow need?
RV: There are some fundamental traits that they need to have. First, motivation. Do you have the motivation? Are you driven to making a bigger impact for the organisation than yourself?

The other aspect is identity. Do you identify yourself as a leader and are you ready to make the sacrifices required to be one? Many people think about getting into a role but do not come to grips with what it entails. There are some markers. An important marker is curiosity. Do you update yourself? Are you thirsty for knowledge? Are you ready to learn about what’s happening in the digital space?

The other thing that we feel leaders need is market insight. How they can take trends and developments in the marketplace and derive insights for their particular business. In an uncertain and volatile world, potential leaders also have to be resilient. They need to be able to deal with the ups and downs of the business. Also, potential leaders have to be determined and remain focused on their objectives, and not change them every six months.

Last, the ability to engage with teams. Most organisations have globally dispersed individuals who can be managed only if you engage with them, influence them and inspire them.

Today, there is also much deeper scrutiny of companies from multiple stakeholders, be it regulators, the media or social media. This requires a much deeper engagement with the external environment. Whether it’s an oil spill off Mexico or some other situation, how do you deal with these and how is the environment reacting to that? These are attributes that we look for in potential leaders — very different from five or 10 years ago.

Damien O’Brien (DB):  In addition to these characteristics, we look for competencies — industry knowledge and skills. So, there is a spectrum of requirements. The interesting thing is that the fundamental traits of resilience, determination and integrity are about character. So, leaders of the future lead with values and character. In the past, CEOs basically had knowledge arbitrage. They knew more than their stakeholders, consumers and employees. Now, many CEOs are finding out things at the same time as their consumers and employees.

So, if you don’t know as much as others, you need to exercise authority on a different basis. Knowledge is power after all. So that is driving a different kind of response, a new power equation. The most effective leaders in today’s situation are those with emotional intelligence; ones who are able to empathise with others and build effective relationships. There is an old saying in our firm: People get hired for the hard factors and fired for the soft factors. You get hired for experience and fired for incompetence.

RV: Leadership is becoming harder basically.
What are the top concerns that companies have?
RV: Sustainability is a top concern. Increasingly, leaders understand that they need business models that are sustainable and create value for generations. There is a recognition. There is too much short-termism, and that is not good for people or the planet.

The second big concern I have heard a lot lately, particularly at Davos, is about re-earning the trust of stakeholders. There is a real sense in the business community that trust has been destroyed. According to a survey by a public relations firm last year, only 18 per cent of people trusted business leaders to tell the truth. When trust breaks down, everything breaks down. The business community needs to address that concern. That means introducing greater levels of transparency, walking the talk and addressing the imbalances in compensation. Developing future leaders and attracting and retaining talent is the third big concern.

How do you address the issue of imbalance in compensation?
DB: It’s a tough issue. In a sense, the compensation issue is a by-product of greater transparency. Earlier, CEOs didn’t know what other CEOs earned. We have public data on compensation, which means every CEO wants to ratchet up his own compensation. So, we have a dynamic that is pushing the mean up all the time. We need a circuit-breaker to address that. I do think this is on the agenda of boards now.

There are some legacy issues with compensation. A lot of compensation contracts, which are proving problematic now, were written five or 10 years ago. When we see CEOs seemingly being paid off for failure, those are probably legacy contracts. Going forward, boards are going to be more mindful about compensation structures.

However, the problem is not going to go away. This will always create tension. After all, there is a demand and supply pool of talent globally. Talent markets have become more global. That has a natural impact on this dynamic as well. Also, top talent is scarce. It’s tough to find individuals who are capable of leading large and complex organisations in today’s world.

Can self-regulation help address the issue?
DB: Boards are addressing the issue. In future, we will see less of the egregious arrangements that we saw in the past. When there is a tide, the rocks don’t show. But when it goes out, you can discover where the problems were.

RV: I don’t think regulations — such as what you can pay managing directors — have ever achieved the intended results. People are paid under different nomenclatures. At the end of the day, this is a demand-supply thing and you will have to pay the market rate for talent. I feel talent is becoming more global and mobile. You see many Indians overseas coming back to the domestic market. If you want to pay for that talent, then you will have to pay what is required — the market benchmark of compensation.

The mantra here has got to be self-regulation. Greater stakeholder activism in this area demands greater transparency and rationalisation. Most of the issues to do with compensation that we encounter are not about fixed compensation, but have to do with ‘golden handshakes’ and ‘exit clauses’, which tend to be very onerous and are under the scanner as we speak.
What you are witnessing is compensation getting a longer-term orientation. You cannot cash out and make a huge packet in the short term. A lot of compensation today is also performance-oriented. How you measure performance is the big issue. If I look at the US, for instance, a lot of it is variable compensation. You have to live and die by how your company performs.

But this is not true in India, where there is high fixed compensation, and not much of a variable component. Does that drive the right behaviour? I don’t think it does. We need to put in place performance measures to specify the levels of performance expected.

Is there a ratio in the compensation paid to CEOs and entry-level hires?
DB: There is no doubt that in today’s world, there is a sense that the imbalance has become disproportionate and inappropriate. However, I happen to share Rajeev’s view that regulation is a  band-aid.  It’s more important to address the fundamental issues here — corporate culture and how you drive fundamental change. Regulation can have unintended consequences and someone else pays the price. It’s not nirvana.

Do you find it easy to get talent, especially women, for board appointments?
RV: Talent is always in short supply. The most difficult thing is getting a board membership for a first-time candidate. Client always wants us to get them experienced board members. But how do you acquire experience if you never get that first appointment? So, our focus is on enlarging the supply pool. We are looking at serving CEOs, chief financial officers, among others.

We are actually telling companies that it adds to their value to have their executives sit on other boards. In academics and in public social service, there is a large supply pool that can be tapped. That’s where firms like ours come in. As we have access to a talent pool. So far, board appointments were made using a limited network of 10 people who, when you tap them, come up with 20 names. We come up with 200 names.

We are also engaging with women candidates and educating them as to how they can become directors. We are putting them in touch with other directors so there is a possibility of mentorship. We are an active supporter of the 30% Club, and are committed to making sure that every time we produce candidates for a position, 30 per cent of them are women. That’s not to say we are not supporting meritocracy. But we are bringing forth a fresh pool of candidates that would otherwise not have made the list.

Once you start putting a ratio to gender-based appointments, isn’t there a danger of  just filling up numbers?
DB: Targets are more effective than quotas. I don’t happen to be a fan of quotas. But I can understand why quotas are being adopted. If you are going to champion diversity, you need to have a board that represents diversity. But quotas are rather harsh and rigid measures.

What is your view on industrial relations taking a back seat today? It seems to have died in the Indian context, with a whole generation of human resource executives not having been trained in the area...

DB:  Funnily enough, my undergraduation major — a double — was economics and industrial relations. But you are right, it’s not the flavour of the moment.

There is the notion of companies negotiating directly with their workforce. That creates more flexibility. Whether it is the right thing, that’s hard to say. Unions played a big role in the Industrial Revolution by protecting the rights of workers. They still have a role to play. But there are other ways of negotiating as well.

Unions may be less relevant in today’s world and can be substituted by a social dimension. Social media can play a check-and-balance role. But one thing is certain: consumers do not want to do business with companies that abuse their workforce.