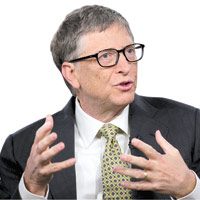 08 November, 2014
Print this article Font size -16+
For the first time in Microsoft’s history, nearly 40 years after Bill Gates founded the company in 1975, he is no longer its largest individual shareholder. That title now belongs to Steve Ballmer, who served as CEO from 2000 to 2014. After Gates sold 4.6 million Microsoft shares recently, as per an SEC filing, he now owns 330 million shares, 3 million less than Ballmer. By selling 20 million shares each quarter for most of the past 12 years under a pre-set trading plan, Gates is expected to exhaust his holdings by September 2018.

A League of His Own
After the Board of Control for Cricket in India (BCCI) slapped an indefinite suspension on the Rajasthan Cricket Association (RCA) following the election of Lalit Modi as its president, the former Indian Premier League commissioner plans to start the Rajathan Premier League. In his first committee meeting after winning the election, the 52-year-old announced plans to build eight academies in the state and stadiums in Jaipur and Udaipur. He also plans to challenge the BCCI’s decision in the Jaipur High Court.

Big Gains
LinkedIn CEO Jeffrey Weiner’s salary package rose more than 42-fold in 2013 to $49.1 million after the company gave out its first stock awards since 2011. That’s up from $1.2 million in 2012 and from $7.6 million in 2011, the year the company went public. The bulk of his compensation package came from stock and option awards totalling $47.4 million— $28.7 million in stock options and $18.7 million in equity awards. In addition, Weiner exercised stock options in 2013, reaping a windfall of $169.8 million.

Arrested!
Chairman of Financial Technologies India (FTIL), Jignesh Shah, has been arrested in connection with the Rs 5,574 crore fraud at the National Spot Exchange (NSEL), a commodities exchange owned by FTIL. The 46-year-old has been under police investigation since August 2013 after NSEL abruptly suspended trade in most of its commodities contracts on 31 July. Shah’s aide Shreekant Javalgekar, former chief of the Multi Commodity Exchange, is also in custody.

Lost Target
Nearly five months after Target Corp, the third largest US retailer, revealed a data breach involving 40 million credit and debit card accounts over a three-week period before Christmas, CEO and chairman Gregg Steinhafel has stepped down. Steinhafel, a 35-year veteran of the company and CEO since 2008, will be temporarily replaced by chief financial officer John Mulligan. The 59-year-old also announced his resignation from the board of directors.

Lower Orbit
The head of Samsung’s mobile design unit, Chang Dong-hoon, has been replaced amid criticism of the company’s latest flagship phone, the Galaxy S5. Chang has stepped down in favour of vice-president of mobile design, Lee Min-hyouk, who is known for his initial role in designing the Galaxy series. He will, however, continue to lead Samsung’s design centre that overseas its overall design strategy.

New Role
Unilever COO Harish Manwani has been elected by Nasdaq-listed Qualcomm Incorporated, the California-based global leader in next-generation wireless technologies, to its board of directors. Manwani, also the chairman of Hindustan Unilever, has over 35 years of consumer product and global management experience.

No Respite
In a huge blow to Sahara Group chairman Subrata Roy, the Supreme Court rejected the writ petition filed against his detention.  Roy, who has been in jail since 4 March for failing to appear at a contempt hearing in a long-running legal battle between his group and the Securities and Exchange Board of India, will continue to remain in jail. The court also rejected Sahara’s latest proposal to pay, in instalments, the Rs 10,000 crore that it had set for Roy’s release.