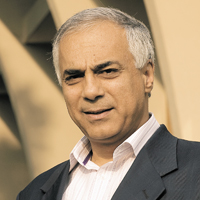 Palo Alto, California-based Norwest Venture Partners has raised a $1.2-billion global fund, NVP XI, the largest in the company's 48-year history. It is also among less than a handful of billion dollar-plus funds raised out of Silicon Valley, since the recession in late 2008. Norwest's new fund is double the size of its last fund. The firm has spent the past few years scaling up operations to broaden the scope of its investments. It has invested $160 million in India since 2005.  Managing Partner Promod Haque spoke to BW's Snigdha Sengupta about the new fund and its implications. Excerpts:

How long have you been fundraising? Is the environment still as tough as last December?

Well, I can only tell you that it did not take us very long. Funds with proven track records are able to raise money. The economy has improved and limited partners (institutions that invest in venture capital funds) are more relaxed now. Also, we have a very diversified approach and that is a matter of some comfort for limited partners.

Did you go into fundraising with a billion dollar-plus corpus in mind?

We have, in fact, scaled up operations worldwide over the past few years to support a bigger fund. When we raised the $650-million NVP X in 2006, we had barely started investing in India. Since then we have scaled up and added a growth investment team to support the early stage team. Simultaneously, we did the same in China and Israel. In the US, we added growth investment people. Today, in terms of operations and focus, we are diversified across geography, sector and stage. In India, this has already played out. Travel portal Yatra, our first deal here, was a pre-seed deal. We've also done Persistent Systems and the National Stock Exchange at the other extreme.

Does that mean that Norwest Ventures is vacating the position of a pure-play venture investor?

We don't see it so much as a venture versus growth argument. Investing in early stage and growth companies is really not that different. What do you need? One, you need to understand the domain. We have that across various sectors. In India, for instance, Sohail Chand, who leads our growth strategy, comes from Goldman Sachs and has experience in dealing with banks and financial institutions. Niren Shah, who leads early stage deals, has operating experience working with eBay and Baazee. Two, the kind of help they need is similar. This includes references to customers, recruiting senior management, bringing in an external board member and so on. Three, they seek our help in brainstorming on strategy. The needs of a $2-million revenue company and a $100-million revenue company are pretty much the same.

What sectors are looking interesting in India now?

We think India is where China was five years ago, certainly in terms of infrastructure build-outs. That is looking interesting now. In addition, we are also looking at financial services and the whole consumer services play, including the internet.