‘Don't Fall In Love With Your Title’ 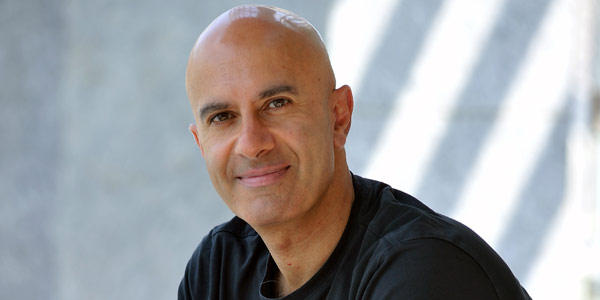 08 November, 2014
Print this article Font size -16+
In a freewheeling tête-à-tête with BW Online’s Sanjitha Rao Chaini, author and management guru Robin Sharma insists that leadership is about the fundamentals and warns top executives not to let their ego scream so loudly and they cannot hear what subordinates have to say.

What brings you here?
The book I am really here to talk about the The Leader Who Had No Title. It is about an idea that every single person in business gets not just an opportunity to work but also to show leadership quality within their work. The old model of leadership says that you need to be a managing director to drive change to get results. But The Leader Who Had No Title says imagine if every single person did not see themselves as the powerless victim, but as the Picasso of their works, someone who could drive change, someone who could be part of the solution versus part of the problem. A job is only a job if you chose to see it as a job.

Does that mean designations are not important?
This is a key point. Designations are important for smooth running and structure of organisations. Ultimately, there should be an executive team where there is accountability. I am simply asking you to go back to your company and create a culture of leadership where every one in every position now says I have to show leadership quality in my work versus to sit back, close his eyes and be a passive victim. Leadership is not about a title, it's about innovation, living the brand values and being inspirational.

What are your thoughts on efforts to detach ego with leadership? It’s easier said that done...
Anything's difficult to execute. An idea remains an idea if you don't execute it. The best leaders are more interested in impact and not just income. They are more interested in growing more leaders as opposed to stroking their ego. That's the difference between a great leader and a bad leader. That's just an idea. Just because it's an idea, it doesn't mean it won't work or we shouldn't discuss it. We shouldn't stop working towards it. How do you build a great company? It's not just the idea that builds great companies such as Google, Facebook, FedEx... the Tata Group or Starbucks. It's the daily, flawless, monomaniacal execution around the idea. Of course, it all comes down to execution of the idea.

So, does this require leaders in every possible department within an organisation, and people to mentor them?
Yes. Your competitive advantage in the organisation comes down to growing leaders in every level faster than the competition. The person who sweeps up at the end of the day, an employee in IT, sales, and the one who answers the phone -- every single person should start thinking like a leader. And that means no complaining or blaming, innovating, being great in what you do in contributing to the results of the organisation.

How should top executives manage their older subordinates?
Leadership is about the fundamentals. You have the position of responsibility. Don't fall in love with your title to the point that your ego is screaming so loudly and you cannot hear what your subordinates are saying. Who would you be without your excuses? I asked this question during a talk and one of the participants said, “My biggest excuse is my experience”. If you study people like Picasso, Da Vinci or Einstein, you would realise that they had an apprentice's mindset versus a master's mindset. The moment you think you are the master, you lose the mastery.

Let's go to the world of business. One of our clients is BlackBerry. One of the co-founders, according to a report I read, fell in love with what he thought to be true. And he fell in love with the dominant market position. And Apple and Samsung ate them for breakfast.


So, if every employee has been performing like a leader and showing results, how should the leader work towards employee appreciation within the organisation?
Every employee requires appreciation. Just give him that. GE is one of our clients. They used to call these things Jack Letters. Every year he would sign a thousand handwritten ‘thank you’ notes. It's a small gesture that helps. Ronald Reagan wrote a ‘thank you’ note to his speech writer for a brilliant speech she had written for him and she put it up on her door for years. When I was in law school, one of my friends got into medical school and he put up his admission letter on the door. Sometimes appreciation is more valuable than money. And I want to be very clear here -- I am not saying money is not important. But according to one of the research, employees want appreciation from their manager more than anything else and one of the reasons they leave is because he did not feel special.

Second thing, how do you honour these people who are CEOs of their own jobs? You give them growth. They want challenging work, they want to express their gifts and talents through challenging work. According to this research, money was eighth in the list of what top talent wants. We have to remember that this generation is different. They want to work with a company with top values; they want to change the world; they want to be connected with other human beings. And money was less important.

For mentoring, leaders need to let go. How does a leader learn to let go?
I am going to quote former American president (Harry S.) Truman. He said, "It is amazing what you can accomplish if you do not care who gets the credit." You have to let other people shine. You can get to your dreams by empowering others. The job of the leader is also to lead themselves. The best leaders spend a lot of time in self reflection, in meditation; they spend a lot of time reading books to enhance their own character. And all these help in business. As you become more powerful, you tend to empower others as well. The best leaders are interested in the benefit of the company than their own egos.

But in these days, amidst travelling, meetings, striking deals, meeting employees, leaders hardly have time to introspect...
Average leaders dilute in their focus; real leaders are monomaniacally focussed. Exceptional business people leverage and use time that ordinary business people waste. If you look at the best companies in the world, Amazon, HP and so on, they still make time to grow more leaders around them and appreciate their employees. What's the point in being busy if you are busy around wrong things?

In India, there are several family-owned businesses where scions automatically take over the top title irrespective of the fact that they are fit for the job...
At the end of the day, leadership is not about excuses, it's about the results. Leadership is not about the genetic make-up. India is a competing on a global stage. May the fastest and the greatest leader win. May the most innovative leader win versus the leader who knows the right people. And if an organisation is populated with people in their positions of power just because of the background that they are from, they could simply get knocked out of the game. Because leadership is about doing your work as good as Picasso painted. It's about developing a team of super stars. If you want an A-Level company, you must have A-Level employees. Leadership is about innovating so that every single thing you touch becomes better than you found it.

It's about being an inspirational person. People did not like Steve Jobs when they worked with him. But they said his acumen, vision, his way of doing things inspired them. Ultimately, leadership is about walking talking value creator.

How important is a B-school degree for a leader?
Let me be very clear here. I have great respect for the business schools, and for formal education too. Yet, leadership is much less about managing matrix and more about inspiring people. In B-schools, they talk about operations of a business, strategy and processes, and all those things are important. But sometimes knowing too much is detrimental in businesses. Which is why we are seeing 17-year-olds are ruling a lot of industries, because they have a beginner's mind set. Take Richard Branson, he doesn't have a university degree. So, he did not know what was not possible. What makes the best leaders is not their education or their IQ. It's called grit. Literally they have an idea and they simply do not give up until they execute and deliver the idea. And they don't teach grit in business school. I am a lawyer and they don't teach grit in law school. That's a character quality. It's about being ridiculously persistent about your goal, making your dreams 10 times larger.