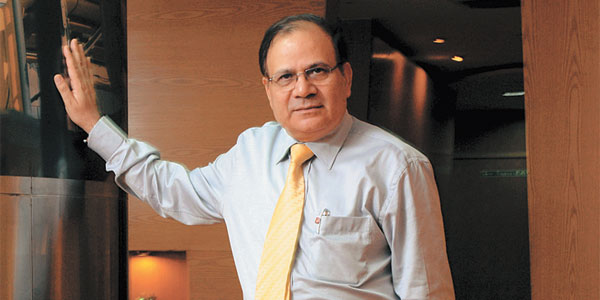 08 November, 2014
Print this article Font size -16+
R S Sharma, former chairman of India's largest upstream company, ONGC, and currently heading Ficci's hydrocarbon committee, says the government should not double the price of natural gas to $8.4 per MMBTU. Talking to BW|Businessworld, Sharma said the price should be kept between $6 and $7 per MMBTU to make sure that the consumers are not hurt.

What fiscal incentive should the govt provide for the hydrocarbon sector in the upcoming budget?
Firstly, the government is charging Service Tax from companies engaged in  hydrocarbon Exploration. Service Tax actually gets levied on revenue generating activities. Exploration per se is not a revenue generating activity. Investors should be exempted from paying Service Tax. The revenue department of the Ministry of Finance feels that why should they let go of their revenue? But they do not understand that if there is no incentive in the exploration sector, their would be no exploration activity and thus no revenue. It is a very short sighted approach of the government.

Second, the definition of ‘mineral oil’ is a problem. When the New Exploration Licensing Policy (NELP) was started, the definition of 'mineral oil' was  oil as well as gas. But finance mister Mr P Chidambaram in one of the budget announcements changed the definition to only oil. This was a serious mistake. We need more incentives for gas. It is a green fuel as compared to oil. India's energy basket has only 9 per cent gas as against the world average of 24 per cent. In a hydrocarbon block, the explorer does not know what will be  the discovery, oil or gas. It makes no sense to tell investors that if you find oil, you will get tax incentive but if you find gas you will not get anything.

Third, there is a lot of hue and cry that gas prices are being abnormaly hiked. One should understand that gas is a much cheaper fuel as compared to oil. The government should give more incentives to explorers in terms of gas pricing because its equivalent price is always cheaper than oil, despite proposed price increase.

What kind of fiscal and production policy should the govt have for Coal Bed Methane (CBM) and other gases?
I would like unconventional gas to be promoted. CBM, Shale and other such gases require higher cost of drilling. CBM is a low pressure gas  and its volume is also less. Its production becomes viable only at a high price. Great Eastern Energy is one of the largest CBM gas producer in India. They are selling it at a market determined price but in small quantities. Non conventional gas producers should have freedom to sell their gas at market price and there should not be any restriction on its pricing.

Moreover, for CBM, currently there is revenue sharing model, the government should keep it like that. There should not be production sharing contract for the CBM gas, which will open the accounts to Comptroller & Auditor General of India for scrutiny of capital investment and cost of production.

Why according to you foreign players have not shown interest in the Indian hydrocarbon sector?
To invite investors in India, the government should treat them as their business partners with respect. Today, Arvind Kejriwal feels business men are looting this country. He accuses all of them of fraud and cheating. This way we will destroy investor sentiment in our country. Prosperity to Aam Admi comes when there is economic development in the country. Even post independence, India had big industrial groups like Tata and Birla that contributed to India's industrial development. That is why it is very important that we pay respect to our industrialists.

But Arvind Kejriwal started accusing a few industrialists of corruption just a year ago. The NELP failed to attract foreign investors even before he came into picture. Who is to be blamed for that?
Dr Manmohan Singh! He is a top class economist but has failed as a manager and administrator. Being the chairman of India's largest exploration company, if I had decided to keep quiet, it would have led to complete indiscipline, chaos and anarchy. In case of Manmohan Singh, he was CEO of the national economy. His continued silence meant that all the discipline got eroded and our democracy became free for all. Everybody thus rightly started criticising the government. This harmed the investor's sentiment the most. He should have taken charge of the economy as well as country as an exemplary leader in order to keep the faith of foreign investors in our country.

Should the govt revise the Rangarajan formula for gas pricing or should it go with the same formula?
Yes, as per me, the formula should be tweaked. See, when there used to be ad hoc hikes in diesel prices, there used to be public cry and the move was criticized. But when the UPA government tried the formula of having a 50 paisa hike per month, nobody took a serious note and small doses of increase got accepted.

For natural gas, the price increase is imminent to honour the contractual commitment of the sovereign government. However, if we double the price in one go from $4.2 per unit to $8.4, it will hurt people and invite huge criticism. The natural gas in the country should be priced between $6-$7 per unit as of now. Government should think how the pricing of gas can be made more comfortable for the consumers, and also be acceptable to the producers. The instant price increase should be for five years. After five years we can deliberate on the pricing mechanism again. There is no need to have 100 per cent international parity for natural gas as of now in order to balance the expectation of the producer and acceptability of the consumer.
Tags assigned to this article:
budget top 2 economic survey budget deficit oil and natural gas budget 2014 neeraj thakur budget 2014-15 hydrcarbons r s sharma