‘Diverse Market To Be Fed With Choices’ 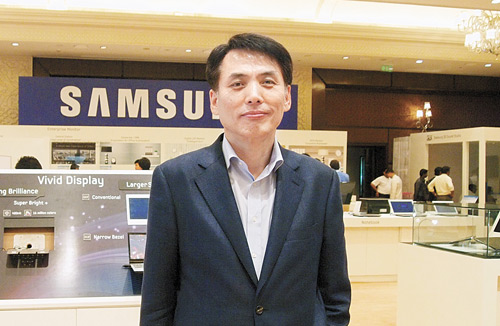 Do local mobile players act as a threat to samsung?
Ranjit: India is a large, attractive market, so there will be various players and brands. The key is: are you committed to the market? Are you wedded to innovation and bringing the right kind of consumer insight into the market? Then you will be successful. There is a perception that India is a low-end, low-priced market. I do not believe that. India has converted now to an upgrade market. Most people who want to have a phone already have one. It is a category where people are willing to pay a bit more for their next phone.

How profitable is the mobile business for Samsung in India?
Ranjit: India is a scale market. It is difficult to make money unless you are at scale. So there are those challenges here. Is it an attractive market? Yes, because the kind of scale you can build here cannot be built in many other markets. We are already in the black in the mobile business.

What is the future of your own mobile OS Bada?
Ryu: It is Samsung's essential part of multi-platform portfolio. Bada will continue to play an important role in democratising smartphone experience. Samsung's multi-platform strategy has proven in the market and will remain unchanged as we want to serve the various market needs.

Ranjit: In fact, we are in the process of launching two models of Bada phones. Wave Y has just been put in the market. We use Wave brand for Bada phones, Galaxy for Android and Omnia for Windows phones. We are in the middle of launching Wave 3. Windows phones have just been launched. Among smartphones, the stack is pretty even between Bada and Android for Samsung. India is a very strong Bada country.

Would Samsung have been as successful without Android, with just Bada?
Ranjit: It is a difficult answer. Would I be happier without getting married? I cannot say that in front of my wife.

What is Samsung's view of the way devices are headed? Will they converge?
Ranjit: My view is: many realities will coexist and we will cater to it all. Our competitive advantage is that we are able to produce innovation on various platforms and we are able to create various form factors which others are not. Our philosophy is choice. We will give choice. That being said, I certainly see convergence happening. How people will consume content or data or access may change. A tablet or a notebook was necessary for a road warrior. Today, you can argue you can do with two. May be in the future, you can do with one. May be it will add on a couple of things for other things. Very often people carry a media consumption device which is different from the laptop.

How critical is the tablet business for you?
Ryu: Samsung would like to be known as the best smart mobile device provider, which covers smartphone, note and tablet category. We are focusing on differentiating product experience as a whole.

Ranjit: Extremely critical, purely from the point of view of how content is consumed and used in India. If you look at the old paradigm, then you would say PCs (personal compueters) or laptops is the way to go. We have those in our portfolio but we know the way the new generation will use and consume data is changing. Tablets are extremely important for education, for youth and also for people in mobility.