Panipat (Haryana) [India], November 27 (ANI): Commuters heading to the national capital from various parts of the country are facing problems after getting stuck on the Delhi-Panipat Highway due to road blockade amid the ongoing 'Delhi chalo' protest march by farmers.
Farmers from Haryana and Punjab are heading to the national capital as part of the protest march against the Centre's farm laws.
"I am coming from Jammu and was supposed to reach Delhi yesterday evening. We have no updates so far," said Shivangi, a commuter stuck in Panipat.
Another commuter said:" We are stuck here. We have small kids with us. We will not be able to move unless the truck is moved in front of our bus."
Police deployed on the Delhi border in view of the farmers' movement and all vehicles heading towards the national capital are being checked. Apart from the presence of personnel, barricading laced with barbwires was placed to stop the approaching protestors.
Also, vehicles are not allowed towards Singhu Border. "Vehicles are not allowed towards Singhu Border. Interstate vehicles may take Western/Eastern peripheral expressway," said Delhi Traffic Police. 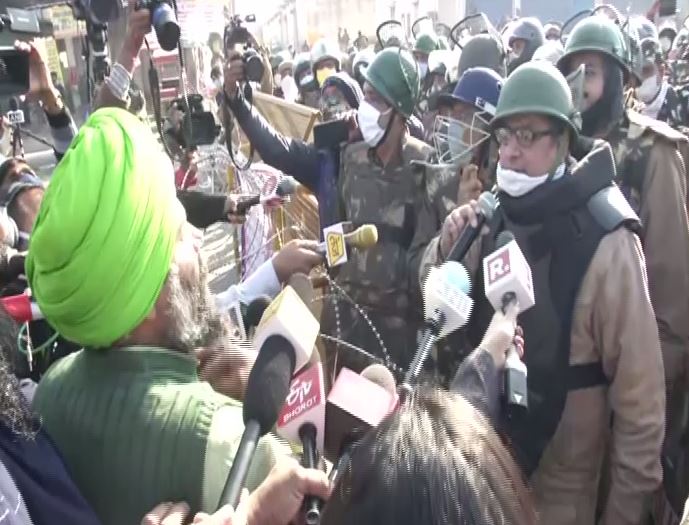 At the border Singhu border (Haryana-Delhi border) the security officials urged the protests to head back given the risks posed by the COVID-19 pandemic.
However, one of the protesters responded by saying that "Was there no coronavirus during the Bihar election. Lakhs and lakhs of people gathered during polls. Where was CoVID-19 then?"
Earlier today, police used tear gas shells to disperse protesting farmers at the Singhu border.
"Farmers from Punjab and Haryana are approaching Delhi for our program organised in Ramleela maidan. Khattar government tried to stop us on the Punjab-Haryana. They used water and cannon and tried to stop. But we managed to surpass that. We are waling against the farm laws that against the interest of farmers and against the interest of the country," said Saddu Singh Aggrawal, one of the protestors heading towards the national capital.
Besides the Haryana-Delhi border, scores of farmers gathered at the Rohtak-Jhajjar border on Friday, for the protest march against the Centre's farm laws. The farmers were seen in large numbers riding the tractors.
Amandeep, a farmer, while speaking to ANI said: "The main demand is that they should listen to us. They have brought farm laws and still, they are not hearing us. If the Minimum Support Price (MSP) and Arhtiyas system (middlemen or service providers) are removed then what will the farmers do?"
While the government said the three laws will do away with middlemen, enabling farmers to sell their produce in the commercial markets, protestors fear that this could lead to the government not buying produce at guaranteed prices, thereby disrupting their timely payments.
Further, heavy security has been deployed at the Rohtak-Jhajjar border, Delhi-Gurugram and Delhi-Jammu highway near Karna Lake in Karnal.
The Farmer's Produce Trade and Commerce (Promotion and Facilitation) Bill, 2020 and the Farmers (Empowerment and Protection) Agreement of Price Assurance and Farm Services Bill, 2020 were passed by the Upper House in September through voice vote despite objection from opposition parties. (ANI)