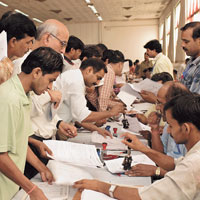 08 November, 2014
Print this article Font size -16+
The current number of people who pay taxes in the country is "too small" and the Income Tax department will focus on non-filers and stop-filers to increase government's revenue collection, newly appointed chairperson of the Central Board of Direct Taxes in India Sudha Sharma told her officers on Monday.

Sharma, a 1976 batch-Indian Revenue Service officer, in her first communication to the Income Tax department after taking over the top post of the Central Board of Direct Taxes (CBDT) this month, also doubted the accuracy of the latest data that only 42,800 people in the country have an annual income of more than Rs one crore.

"As tax collectors of the country we have a pivotal role to play in national growth. The huge target of budget collection, for the year 2012-13, may not be an easy task but we should consider that the base of only about 3.5 crore assesses, a mere 2.9 per cent of national population, wherein only 42,800 show annual income over Rs one crore, is too small for a country like ours.

"For sure, potential for tax collection is much higher than what we achieve at present," Sharma said.

The government plans to collect over Rs 6.68 lakh crore in direct taxes during 2013-14, up from Rs 5.65 lakh crore in the previous fiscal.

Sharma said while the I-T department's endeavour would be to promote voluntary compliance and provide a hassle-free service to honest tax payers, it would also "need to focus on non-filers and stop-filers in order to enhance the tax base and augment tax collection."
"We aim at achieving a tax regulation regimen in India which can match the best in the world," she said.

Sharma, who has served as the chief of Vigilance Directorate of I-T in Delhi before being appointed member in the CBDT and subsequently being elevated as Chairperson, said her "biggest strength" to achieve these daunting direct tax targets was the talented and hard-working workforce of the department.

"I am fully aware that this department is full of talented, hard-working and dedicated officers and members of staff and that is my biggest strength. Believe me, I believe you and your potential and hope that each one of you will rise to the occasion and prove yourself to be an effective instrument in improving our working, in bringing about transparency and in making objective, fair and quick decisions with ethical base and humane touch.

"I want all of you to be 'thinking' persons, with ingenuity to think ways and means for the development of the Department and the well-being of the nation. Together, we can not only chart the course set for us, we can also take strides in a direction whereby every Indian should feel proud of our services," she said.