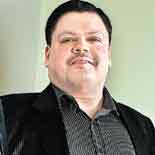 What popular culture calls contemporary art does not work. I admire Andy Warhol's (1928-87) breakthrough portraits on silk screens, capturing the mystique on the face of Hollywood stars such as Marilyn Monroe, Joan Collins and Elizabeth Taylor. I have no patience with gimmicks such as the use of plastic dolls that grossly distort what art really is.

Unlike the West, things look brighter in India and China. The refreshing content and artistic technique of charged up artists are in stark contrast to the apocalyptic end of creativity that we are seeing in the West. In India, progressive artists are expressing distinct and unrestricted styles while remaining true to their roots. This renaissance of Indian art has been inspired by the example set by the Progressive Artists' Group founded by my father, F.N. Souza, that gave a new impetus and a distinctive individualistic style to ‘art for art's sake'. This concept has now sadly diminished due to the commercialisation and thrust towards profitability. The negative fallout is that artists are no longer in the profession out of passion and the sheer love of their work. Unfortunately, this disturbing tendency has also reached Indian shores.

Manipulation Of Prices
Under the pretext of trying to avoid an art bubble' certain dealers in India are of the opinion that the prices of paintings by grand masters such as F.N. Souza, M.F. Hussain, and S.H. Raza should fall within a ‘common' range and not go above seven to eight digits. This is an alarming trend, as it is not an art dealers business to control or manipulate the value of a painting. In the West, things are different. The value of a painting is based on merit and its investment potential. If people feel an individual artist should command an eight, nine or even higher figure, then so be it. I don't find this trend towards the manipulation of prices by dealers in western countries; I feel it should be clarified in India before the true value of paintings gets distorted.

My Favourite Paintings
As the only son of one of India's most renowned modernist painter F.N. Souza (1924-2002), I grew up breathing art. Today as the sole heir to the F.N. Souza Estate and as a board member, trustee and authenticator of the F.N. Souza International Fine Art Foundation and Family Trust Inc., I am involved with my father's work on a daily basis. Some of his most exciting paintings include ‘Byzantine Series' (1958) and ‘Beasts of Prey' (1963) and his 1950s and 1960s ‘Landscapes' and ‘Heads'. Western artists that I hold in high esteem include the outstanding works of Pablo Picasso in his blue period (1901-04) when his monochromatic paintings included nudes and abstracts in shades of blue. I am a fan of Salvador Dali whose fantasy world always fascinated me. My other personal favourite is Scottish painter Ken Currie.

I am often asked how contemporary art is different to medieval times (5th-15th century), both in India and globally. One thing that strikes me about Michelangelo's immortal art in the Sistine Chapel and Botticelli's portrayal of cherubic angels is the depiction of man as a perfect and godlike being. By contrast the distorted faces in my father's masterpieces act as a mirror to reflect the disillusionment of the modern world. Souza wanted to expose the seamier more hypocritical side of modern society and the imperfection of man. His tendency to, ‘telling it as it really is' made him quip, "Renaissance painters painted men and women making them look like angels. I paint for angels to show them what men and women really look like."
The other difference between traditional and modern art was the monopoly the royalty and the church had over art. Today art is within the reach of the common man. In that process, the quality of fine art may have taken a beating. However, I am convinced that brilliant artists in India and China will contribute to the future evolution of contemporary art.