'Basic Infrastructure Should Be With Government' 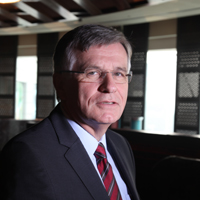 08 November, 2014
Print this article Font size -16+
Voith, a Germany-based engineering company, has big plans for India but the management is waiting for the policymakers to accelerate decision making and remove hindrances faced by overseas businesses operating in India. The group of companies operate in 50 countries including India. In India, the group has four businesses — Voith Turbo, Voith Paper, Voith Hydro and Voith Industrial Services. The company has been present in India since 1968 when it set up its paper business. Businessworld's Chhavi Tyagi spoke to Dr.  Hubert Lienhard, Chief Executive Officer and President, Voith GmbH.

Which policies of the Indian government affect Voith the most?
If we compare the power sector of India with those of other nations like the US or Europe or Latin America there is a huge difference in the fundamental structure of the industry. The power plants in all these countries are built by the federal government.

In India, a lot of power has been given to the states and basically the structure hasn't worked. There is a lack of execution here. The biggest example of this hitch are the Ultra Mega Power Projects (UMPP) — only Tata Power has managed to get their project going, the rest are stuck at some or the other level. The chair of NHPC was lying vacant for two years and it is things like this which makes a huge difference. The government has to take leadership in this and not keep it to states. I believe that strengthening of organisations like NTPC by giving them more money, more power and more people will help us because this is one organisation which has shown that they can execute.

So would you prefer doing business with public enterprises over private companies?
Yes, specifically in power. I believe that one can run public companies with the same governance as private companies. In Germany, Deutsche Bahn AG is a public owned company and a very effective one at that. I am not saying that there should be no private money but the basic infrastructure should be with the government.

Our experience of working with NTPC exemplified all these. We have had very successful projects completed on schedule. All this can be achieved with the right governance and the right management. The problem with a lot of private companies is that they are facing funding problems. Most of them are in high debt and therefore don't have a better rating than the government companies.

How has slowdown impacted your business?
Things are slowing down everywhere. India has already slowed down and China is also not really growing anymore. We see some growth in the US and in Brazil. This has affected our topline growth. We have been experiencing significant problems in our paper business which has been affected by the developments in technology. This has necessitated a restructuring of our approach and we have changed our business model for Voith Paper. We are now meeting the demands of the packaging tissues market, special papers, etc. For instance, we have a large demand for bank notes in India. However, the outlook is not as good as it was over a year ago.

Has it also impacted your sales volume?
We have seen a downturn in our sales in India and this is again because we could not meet our goals set for hydro power. Our paper business has seen the biggest numbers even though power and hydro have the biggest potential. We have establishments in Faridabad, Hyderabad, Pune, Noida and Kolkata and the business is self sustaining at the moment. We are making good earnings but it is a boring growth. I have been coming to India since 1987 and I see a humongous potential in this country with skilled and educated people but it is high time that this gets going.

Which sector in India has the most potential for your products/services?
Hydro power has a potential of 800,000 MW in this country but nothing happens in this segment. I would say that the current investment climate in India is not conducive for big investments.

Does the recent imposition of import duty on foreign equipment affect Voith?
It doesn't affect us much because we produce much of our products in the country itself. That is our philosophy and we try to implement it where we can. We produce for Europe in Europe, in Asia for Asia and in America for America. We don't have a single expat in our management here and we are as good as an Indian company. For some product, we do import as the volume is too small to open a production unit here but as soon as the volume will pick up, we will start local production like we do in China.

How is your business in India faring as compared to European countries?
We had a good run last year as far as Voith Toubro is concerned but our hydro business did not come up to the expectations. Our hydro division, Voith Hydro is really down and nothing much is happening in that. Other than Voith Toubro, our two other segments - Voith Paper and Voith Services - are also doing well. Our paper business is well supported by the number of projects we have in hand and we expect our services division to grow by 50 percent this year.  So, we present a very mixed picture right now.

How much does India contribute to the Voith's overall revenue? Which segment in India generates the most?
Our total revenue from India is around 100 million euro which is a fairly small amount when you compare it to the size of the country. Also, it seems very small when we compare it to our business in the neighbouring country China where the size of our business is more than tenfold. However, India has been a profitable business but the impact of the slowdown in our orders and sales can be clearly seen when compared to what we had planned. But we are not a company which moves out in case the volumes are low. We have long term plans for India and we are hopeful that given the number of people we will see more business soon.

Giving us further hope is the recent change in the Cabinet and with Mr. Chidambaram heading the finance ministry we have hopes of India returning to the eight percent growth. Since we supply to the infrastructure companies, there has to be a growth in the infrastructure for us to grow. In case things remain as they are, we see only our services division growing. We do want to expand as much as we can in India. Although we are very small when it comes to volume in services, we are hopeful of growing by 50 per cent this year.

How much of investments have you planned for India? Which business segment and region will get the majority if it?
We have postponed all investment plans at present because there is hardly any growth in the volume. Whatever small investments are required can be made with the earnings in the country. However, all major expenditure is presently stalled in India. For instance, we want to buy a big land area in Hyderabad but we have been forced to postpone it because at the moment it doesn't make sense. The group does not have any net debt. We have the money and we do want to invest but the current conditions don't allow us to.

What are your future plans for India?
We believe we have a structure here which is capable of growing at any time when the demand presents itself. We are ready to invest the moment demand picks up. We actually have money sitting in the country to invest but the opportunity has to present itself.
Tags assigned to this article:
news 8 exclusive to web infrastructure interview ntpc power chhavi tyagi hubert lienhard voith voith gmbh