'Back-end Is Where We Add Value' 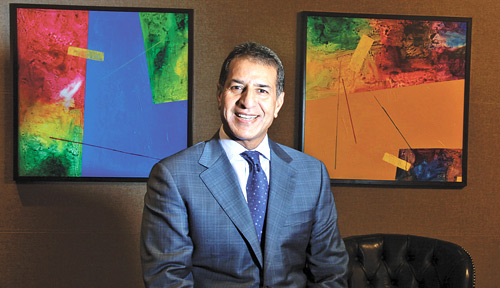 What about easyday.in to order from home?
That we are in the process of putting up, because that is also going to play a big role. In the western world, e-shopping is becoming a disruptive force. In India, we still have this touch-and-feel outing. Is India a successful model? The answer is no for the category that we are talking about. I am not talking about hotel reservations or flight reservations.

Internationally, Walmart is also on the learning curve. They are more a brick-and-mortar company than an e-company, but they have started putting their mind behind it because that is also the future for those destinations.

And how does the 16 per cent compare with Walmart?
Worldwide, they are anywhere between 20 and 40 per cent, 40 per cent on start-ups... so it is really on the maturity of the curve. I would believe that considering that we are two-and-a-half years old, I would say it is a good curve.

Also, retail market is lot different than you may see. Within Delhi, you could find 10 different markets. You could open a store where you don't realise — and it has happened — that there are more people from the Jain community. And you open a meat store there. Not only that meat will not sell, the people will not even come to your shop to buy other goods because they will believe it is all meat. There are these things that people do not understand.

Just to give you an anecdote... this is how they were planning to. I said, no, don't do that. Sub-segment it. So, where we are finding a 50-50 population, the entire meat section has been enclosed. If you don't wish to do that section, you are completely out.

What has been the impact of the slow-down on business in general, and on Bharti Retail in particular?
The general slowdown is a worry among business leaders. Sure enough, there is cause for worry. Consumption is still happening, but there is a lag effect. Also, we have to realise that the US and Europe don't seem to be coming out of the crisis easily. The US is still fragile. Europe is struggling. Will they turn around the next year, will they stabilise? We have to see. Similarly, export will get impacted. So, some slowdown has to happen, but considering what is happening around the world, thankfully, our internal consumption still remains intact. And that is why even if the nation can grow at 7 per cent next year, I would say we would have done commendably.

what HAS BEEN extent of slowdown in Bharti Retail?
I will be honest enough. Two, three things we have to understand.  Slowdown impacts in categories, not as a blanket. The kitchen has to run, food products, FMCGs, and those consumptions have to be done. Discretion spends are something where you start cutting. That's why car sales have slowed down, while the two-wheelers are still doing well. I have to say we haven't seen it in our business. We also have to understand
that we are a very small category within the large category.

Even in discretionary spends, are you not seeing any dampening effect?
Not much till now. You could find a certain slowdown next year, if the petrol prices remain where they are and the dollar remains where it is. You don't actually get to know that lag effect in a month or two. It takes about 4-5 months to come in.

My worry is in the last quarter we witnessed 6.9 per cent growth and what I hear is that in this quarter it is even lower. If that be the case, you will start seeing some impact in the next quarter.