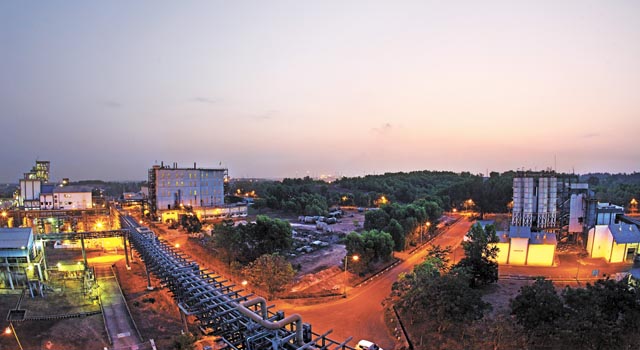 14 September, 2015
Print this article Font size -16+
Prime Minister Narendra Modi’s home state Gujarat ranks at the top of an assessment of state implementation of business reforms sponsored by the department of industrial policy and promotion (DIPP). Andhra Pradesh, Jharkhand, Chhattisgarh and Madhya Pradesh are the remaining states in the top five. While Andhra Pradesh is an NDA ally, other states are all ruled by BJP governments. Incidentally, the sixth spot has gone to Rajasthan, another BJP-ruled state.
Poll-bound Bihar is placed 21st while Arunachal Pradesh came last with a rank of 32.
Aiming to enhance the country's image as a friendly investment destination, the government along with World Bank has released a state-wise report on the ease of doing business.  The report titled “Assessment of State Implementation of Business Reforms” was released on Monday (14 September). This report captures the findings of an assessment of reform implementation by states, conducted jointly by the Department of Industrial Policy and Promotion (DIPP), Ministry of Commerce & Industry, Government of India, the World Bank Group and KPMG as the knowledge partner, the Confederation of Indian Industry (CII) and the Federation of Indian Chambers of Commerce and Industry (Ficci).
“What this report does very well is to provide a roadmap for states serious about improving their business environment and creating jobs. This has an inclusive objective as it is the small and medium enterprises which will gain the most from these reforms,” said Onno Ruhl, World Bank Country Director in India.
“The World Bank stands ready to assist state governments in this important agenda,” he added.
“This report is the result of joint efforts by central government, state governments, the private sector, consultants and international agencies. This is a unique work which will spur states to become champions of change,” said Chandrajit Banerjee, Director General, CII.
According to the assessment, Andhra Pradesh, Chhattisgarh, Gujarat, Jharkhand, Madhya Pradesh, Odisha and Rajasthan have implemented over 50 per cent of the 98 point action plan business reforms studied in the assessment. Karnataka, Maharashtra and Uttar Pradesh are also among the top 10 states in the assessment. No state has implemented 75 per cent or more of the proposed reforms.
However, the report also flags a multitude of reforms that still need to be implemented effectively by most states. A majority of states are yet to begin implementing electronic courts to resolve commercial disputes, i.e. infrastructure to allow for e-filing of disputes, issuance of e-summons, online payments, e-cause lists and digitally signed court orders. Twenty six states are yet to introduce reforms along a wide range of labor inspections under various acts, or on inspections related to building permits. About 25 states lack online availability of information on land banks, and use of GIS systems to track industrial land parcels.
Gujarat has topped the list with a score of 71.14 per cent.  Andhra Pradesh was at the second place with 70.12 per cent. Jharkhand is third with 63.09 per cent; Chhattisgarh fourth with 62.45 per cent and Madhya Pradesh is fifth with 62.00 per cent scrore.
The report assesses implementation status of 98-point reform measures across the following eight areas: Setting up a business, Allotment of land and obtaining construction permit, Complying with environment procedures, Complying with labour regulations, Obtaining infrastructure related utilities, Registering and complying with tax procedures, Carrying out inspections and Enforcing contracts.
The move is expected to encourage states to carry out reforms in areas such as land acquisition and labour laws, where the Modi-led central government is finding it difficult to make legislative headway. 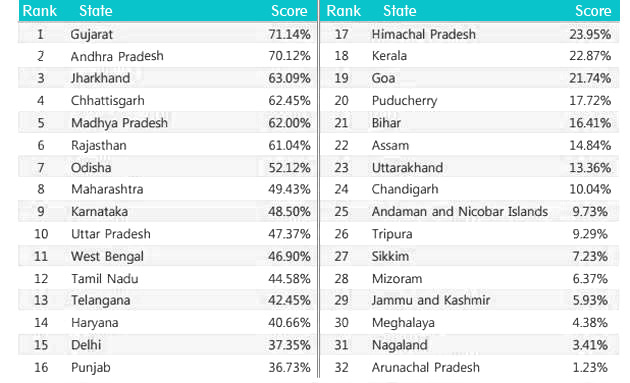