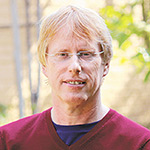 31 March, 2015
Print this article Font size -16+
How did the idea of writing The First Firangis come to you?
The book is a work of history, but it is also an oblique autobiography – told through the lives of others – about my own experience as an immigrant to India.  In the years I have been living here, my identity has transformed a great deal: my body has been colonised and transformed by Indian matter, be it desi food, clothes, weather, landscapes, or germs.  I had been deeply impressed by William Dalrymple’s White Mughals.  But Dalrymple’s White Mughals were largely powerful men who assumed high offices within the machinery of British colonialism.  By contrast, I was interested in the lives of poor foreign migrants from several centuries earlier who came to India with much humbler ambitions — to escape poverty and persecution, and to find a better life here.  I was interested in tales of foreign migrants who  were not conquerors or colonialists.

Who do you think were the most fierce businessmen among the firangis?
Few rivalled the Portuguese for fierceness and cruelty at this time: they were looking to take possession of the lucrative spice trade by any means necessary, and Vasco da Gama and his successors came to India armed to the hilt.  But the most successful firangi business community in the 16th and 17th centuries were probably the Armenians, who were invited to Mughal Hindustan by Akbar in large part because of their powerful trade connections from Central Asia to the Levant.

You have lived in the US,  and in England and now settled in India. What are your views on  the Indian society?
It’s hard to generalise about Indian society. This is a land of rigid tradition but also of constant transformation. If there’s one way in which I have experienced change in New Delhi differently from elsewhere in the world, it is that the pace of modernisation here is both bewilderingly fast yet also agonisingly slow. Entire new city skylines can materialise in Noida, Gurgaon or Sonepat seemingly overnight. Yet vital old infrastructure takes forever to be repaired or improved. Kyaa karein? Hum toh aise hain!