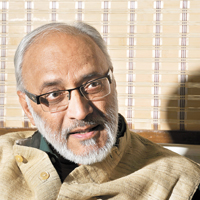 Two years ago it was discussed that the Budget would provide money for the second Green Revolution. Our back of the envelope calculation was Rs 40,000 crore (Rs 8,000 crore every year for five years). Rs 400 crore was allocated. You want a second Green Revol-ution and you put Rs 400 crore. I haven't heard a bigger joke. There are no roads there, no power, no procurement centre — the temple courtyard is the procurement centre. Are we joking?

So, will we continue to see farmer suicides?
Well, if "business as usual" continues and no one bites the bullet, yes, I am afraid you cannot stop such unfortunate incidents. We only react to a crisis. We don't do any advance planning to avoid it. In Vidarbha, there is a serious shortage of water. They have some 5 per cent of area under irrigation. And if you are growing cotton, 95 per cent of which is BT which wants water, you are playing with fire (without water).

Only now, the state government has come up with a Rs 13,000-crore plan for irrigation, but it doesn't have the money. They have only quick fixes — Rs 300 crore here and Rs 400 crore there. The state will now apply to the Centre for a special package. These are hot spots. They don't need Rs 300-400 crore, They need Rs 50,000 crore to resolve the problem. Why don't you invest there instead of giving free food, etc. That's the trade off.