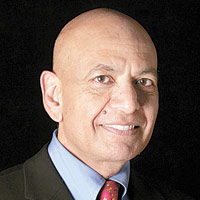 08 November, 2014
Print this article Font size -16+
Anil K. Gupta is the Michael Dingman Chair in Strategy and Globalisation at the Robert H. Smith School of Business, University of Maryland, College Park. The author of six books, including most recently The Silk Road Rediscovered (Wiley, 2014), he is a member of the World Economic Forum's Global Agenda Council on Emerging Multinationals and has been ranked by Thinkers50 as one of the "world's most influential living management thinkers."

What will be the impact of the growing Indo-Japan relationship on India's economic and strategic partnership with China?
The impact will be quite positive. China is very keen to play a significant role in India's infrastructure build-up. The prospects of Japanese companies playing a sizable role makes the Chinese even more keen not to be left out. It's very telling that the main front-page headline of China Daily on Sept. 4, the last day of Modi's visit to Japan, read:"Chinese Companies Keen to Play Important Role in India's High Speed Rail." Obviously, the Chinese leadership is sending an important signal. The economic relationship between India and Japan and that between India and China is anything but zero-sum.

Even on the geopolitical front, the impact on the India-China relationship will be positive. China doesn't gain anything by India becoming a stronger ally of Japan and the US. Thus, any prospect of closer India-Japan and India-US relations makes the Chinese nervous and more keen to send positive signals to India. Of course, China is unlikely to be happy that India will increase strategic cooperation with Japan. However, China gains nothing by accelerating the formation of an even closer defense relationship between India and Japan. That's why, throughout Modi's Japan trip, the Chinese media blamed (Japanese Prime Minister Shinzo) Abe for trying to divide India and China and refrained from saying anything negative about Modi himself.

Are there any trade and industrial segments in China that will lose out to Japan due to the closer Indo-Japanese engagement?
Not really. The economic relationships are entirely non-zero-sum. It's better for India to not rely overly on just one partner. The larger the number of economic partners India cultivates, the better it is for the country. Modi knows it well and played this game beautifully in Gujarat.

Will China ignore the "expansionist" tag Modi indirectly gave to it during his Japanese lecture? What could be its impact?
Looking at the reporting in the Chinese media, it's clear that China is already ignoring it. China knows that Modi is a staunch nationalist. It also knows that Modi has made similar statements in the past, for example while campaigning in the Northeast (India). China wants to live with Modi. It also knows that strong leaders such as Xi and Modi may find it easier to resolve the border disagreements amicably than weak leaders such as Hu (Jintao) and (Manmohan) Singh.

Do you consider Modi's posture as an attempt to engage Japan as a counterbalance to China?
I wouldn't use the term "counterbalance." Modi enjoys an excellent personal relationship with Abe. Thus, his posture is a natural outcome of the mutual affection between the two leaders. That said, Modi knows that it's better for India to play all sides - Japan, China, Russia, Europe and, of course, the US. Making all of them eager to engage with India increases the likelihood that India will get the sweetest possible deals. Just look at the agreement regarding uranium signed by Modi and (Australian Prime Minister Tony) Abbott last week.

Do you think India can successfully engage with China and Japan at the same time? What are the areas where India-China engagement will grow irrespective of India's trade and economic relations with the rest of the world?
Absolutely, yes. Even as the CM of Gujarat, Modi enjoyed excellent rapport with Abe and, yet, he visited China four times and attracted more Chinese FDI into Gujarat than any other state. Modi is a shrewd "businessman" and knows how to leverage the spillovers from one relationship onto another.

Over the next five years, the China-India engagement will be primarily around infrastructure projects, the sourcing and manufacture of railway rolling stock and power equipment. As India's infrastructure starts becoming stronger, we can expect FDI from China across a larger spectrum of industries. By 2020, I won't be surprised if Chinese companies begin to manufacture in India for export back to China. By then, the wage gap between India and China will be even larger. Also, India's engineering and management skills are very strong. The only major weakness that India suffers from is infrastructure. Once this weakness is taken care of, we'll begin to see a new paradigm.

Is there a solution to the growing imbalance in India-China trade?
Not over the next five years. However, from 2020 onwards we should expect to see rapid growth in the export of manufactured goods from India to China. Also, India will become a bigger breadbasket for the world. In contrast, China will remain an agriculture importer for a long time. Thus, I also expect the emergence of sizable exports of agricultural products (grains as well as beef) from India to China. All of this is counter-intuitive thinking but entirely logical and highly probable.